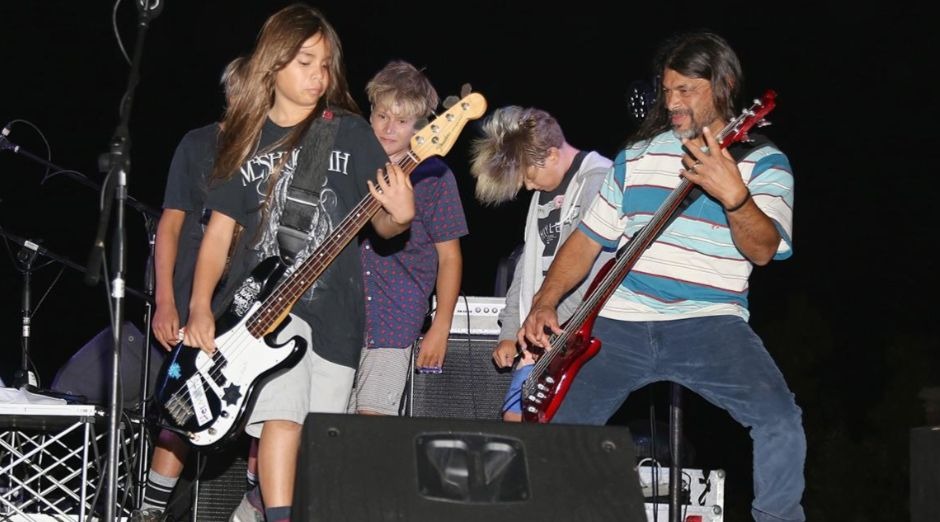 Metallica bassist Rob Trujillo talked about his prodigy son Tye, that already played bass with Korn and Sucidal Tendencies. The 15-yeard-old boy impressed fans by his amazing skills with the instrument.

Rob Trujillo talked about his his prodigy son Tye playing bass with Korn and more:

“With your children, you don’t want to force anything on them; my son chose drums originally at a very young age – we’re talking diapers – and then he used to play this little plastic guitar when he was like, one.

“And he played that thing to the point where the plastic was grounded, from just hitting it, downstroke and all that, and he played drums, and then he one day asked me if I could show him something on the bass.

“So I showed him the C-major scale, which is kind of one of the first things that you show somebody. Then like a day later, he had it already. And then it was like the blues scale; and then he just sort of gravitated towards Jaco Pastorius bass solos.

“I mean, at 11, so it was crazy. It is kind of crazy that he has the skillset for that, and then he plays guitar so he’s doing a lot of riff-writing, and a lot of really great riffs.

“And now he’s also into hip-hop too. But again, I just sort of encouraged him to have fun and to be creative. The gig opportunities that have come for him, you know. He had to earn them, it was like an audition, you know?

“The Korn gig didn’t just get handed to him, he had to prove himself, and he was 12. But the thing that was really interesting about that was – I was gone on tour most of the time, I was away.

“And he really put in the time and energy to learn the songs on his own. He’s very mature about it. He got together with [Korn guitarist James Shaffer] ‘Munky,’ and they had their own kind of rehearsal here at the house, and I was just sort of there to provide water, milk and cookies. [Laughs].

“He also had done a Suicidal Tendencies gig maybe six months ago. And he played the whole show in San Pedro. That was really cool, to see him up there with [drummer] Dave Lombardo.”

“In fact, the first song, like, literally one minute in, he got slammed, but [singer] Mike Muir ran across the stage and Tye went up on the drum riser, and he does this kind of thing that he does where he jumps off the drum riser, kind of spirals off of it.

“And he did it and I’m thinking, ‘Oh, here it goes, man.’ Mike turned around to go the other way when my son’s feet hit the ground. He got blown over, by Mike.”