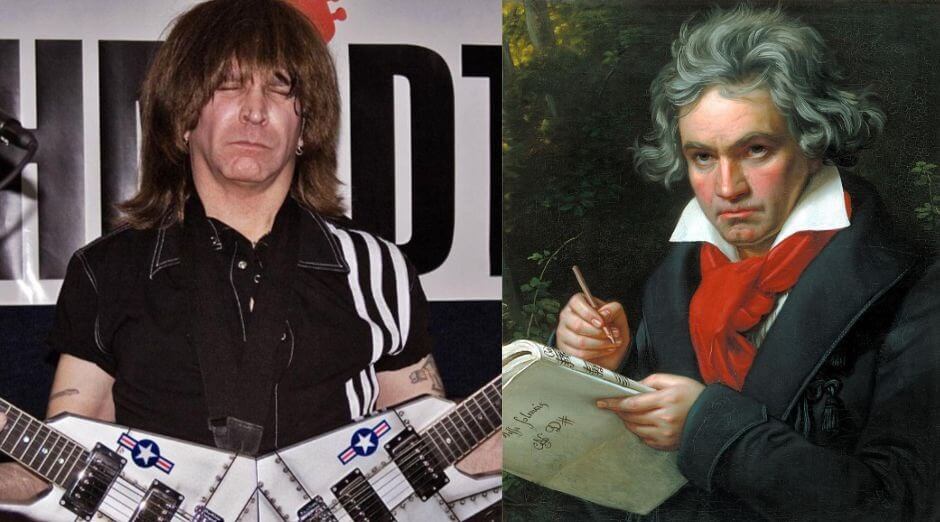 Guitarist Michael Angelo Batio reflected how famous composer Beethoven “Was Like a Hair Metal Guy”.  On the same interview with Rock Titan explained why he doesn’t like the term “Virtuoso”. Michael recently released a new album called “More Machine Than Man.”

Michael Angelo Batio said about Beethoven and the term “virtuoso”:

Would you consider yourself a virtuoso then?

“In today’s terms, yes. In the classical sense, meaning in a hundred-plus years ago, if that’s what I was labeled, so what? There’s a lot of great people through our history that critics have. The Beatles, Led Zeppelin couldn’t write. So I’m in good company if you want to criticize. But I think my fans know, one of the things that I pride myself on is that all my records sound different.”

“‘More Machine Than Man,’ stylistically, the way I put phrases together is very different from ‘No Boundaries.’ And a lot of artists can’t do that; that they get pigeonholed and they get stuck in what they do, and they keep rehashing different versions of themselves.”

“What I’ve done, especially after my fourth album, it was called ‘Lucid Intervals,’ I started hearing some riffs on that record that I played in my first album ‘No Boundaries,’ and I said, ‘This has got to change. And from that point on, I made a very serious decision musically and artistically to make sure each record that I do, all the songs have different things, it’s still me. But it’s a different kind of playing.”

The thing that made me think is just the fact that you created the whole idea of the double guitar and the quad guitar. What made you even think of that?

“Well, again, I’m gonna defer to my music-history background. When you look in the past, you see similarities, like, who are some of the famous musicians of the era? Beethoven, he had over 5,000 people come to his funeral, he was really famous, but he had a wild look.

“He had this massive hair, he was like a hair-metal guy, you know? Now, of course, he was deaf later in life, but his brilliance, his image was like, ‘I am Beethoven,’ he had this wild head of hair, and he had charisma unlike most of the people of his day.

“Another one, Paganini, one of the greatest violinists that have ever walked this earth was really feisty, he had a very strange stage presence, but because he was not only a great musician, he had charisma, he was able to be one of the highest-paid musicians of his day.

“Would Elvis Presley have been as big if he didn’t look as cool as he did? Even the pictures today, I mean, that dude was cool-looking, and I got to see him in concert when I was a kid.”

“The Beatles image, Frank Sinatra, I don’t know a lot about him, but you see the same patterns throughout history, so when I said to myself, ‘Did Jimmy Page need a violin bow, did he really need to hold his guitar down by his ankles? Did he need to wear the wizard suit from Hogwarts, teacher of the dark arts?’

“No. Did Robert Plant get a bushy head of hair? Do they need that? The answer is no, but when you have the music and some kind of thing that makes you different, that’s the recipe for success. It doesn’t mean you’re gonna make it, but it means you have a shot.

“My first drawings of the double guitar were two guitars up – and then I went to an Eddie Van Halen concert, his second tour when he did ‘Cathedral’ and he put his guitar, he had a guitar stand, lifted it up.

“And I watched Eddie play, he was always arcing his guitar. And I traced a full-size image of him in one of the rock magazines, flipped it over – there is my double. I had a thing called a protractor, measured angles, looked at the angles, so I said, ‘Now I’ve got a real double guitar.’

“Because I can play it this way and this way, so there was a lot of thought behind this. I actually got it made in Chicago, and I said, ‘Okay, 115, 120 degrees.’ We did it very unscientifically, we took these two small Explorer-type guitars and just chopped them.”

“We just sawed them and then I put it together. But yeah, I invented it, but I wanted to do something different, just like Hendrix with smashing, burning guitars. Pete Townshend did this, all these rock greats that I love had something on stage that made them – them. Slash with his top hat – the dude has an Abe Lincoln top hat. I mean, if you’re gonna be in a band playing Slash, you better wear Honest Abe, and you better have a Les Paul down your ankles, and so he’s got an image.

“Slipknot wearing masks. So call it what you want, but I really do it. Just like I have the most respect for KISS. Can you imagine wearing makeup like that for 40 years? Gene Simmons shooting fire like that for thousands of concerts. What if the wind was blowing the wrong way? I really do it, that’s the key, I really play it. And I do a lot with it, and that’s the difference.”