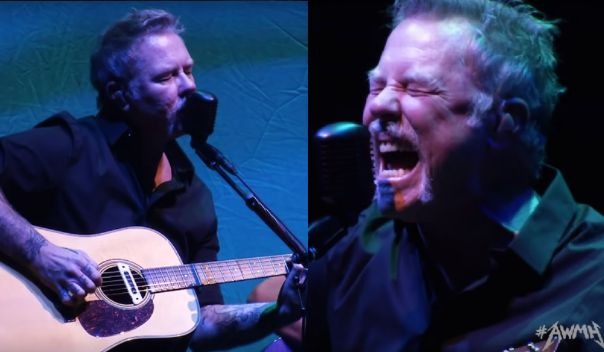 Metallica shared a video in which they play an acoustic version of ‘Enter Sandman’, one of its classic songs.

This version was part of an acoustic spectacle that took place in San Francisco in November, and that served to raise funds for the Foundation All Within My Hands, in support of the most disadvantaged.

This version – which sounds quite different from what we know of the tune – is still part of a new Metallica live album, “Helping Hands … Live & Acoustic At The Masonic”, released last week through independent record stores and in format digital and streaming.

“Enter Sandman” was released as the first single from their self-titled fifth album, Metallica in 1991. The music was written by Kirk Hammett, James Hetfield and Lars Ulrich. Vocalist and rhythm guitarist Hetfield wrote the lyrics, which deal with the concept of a child’s nightmares.

David Gilmour plays Pink Floyd on guitars that will be auctioned
Roger Waters says to Trump: “Hands Off Venezuela”
Advertisement
To Top