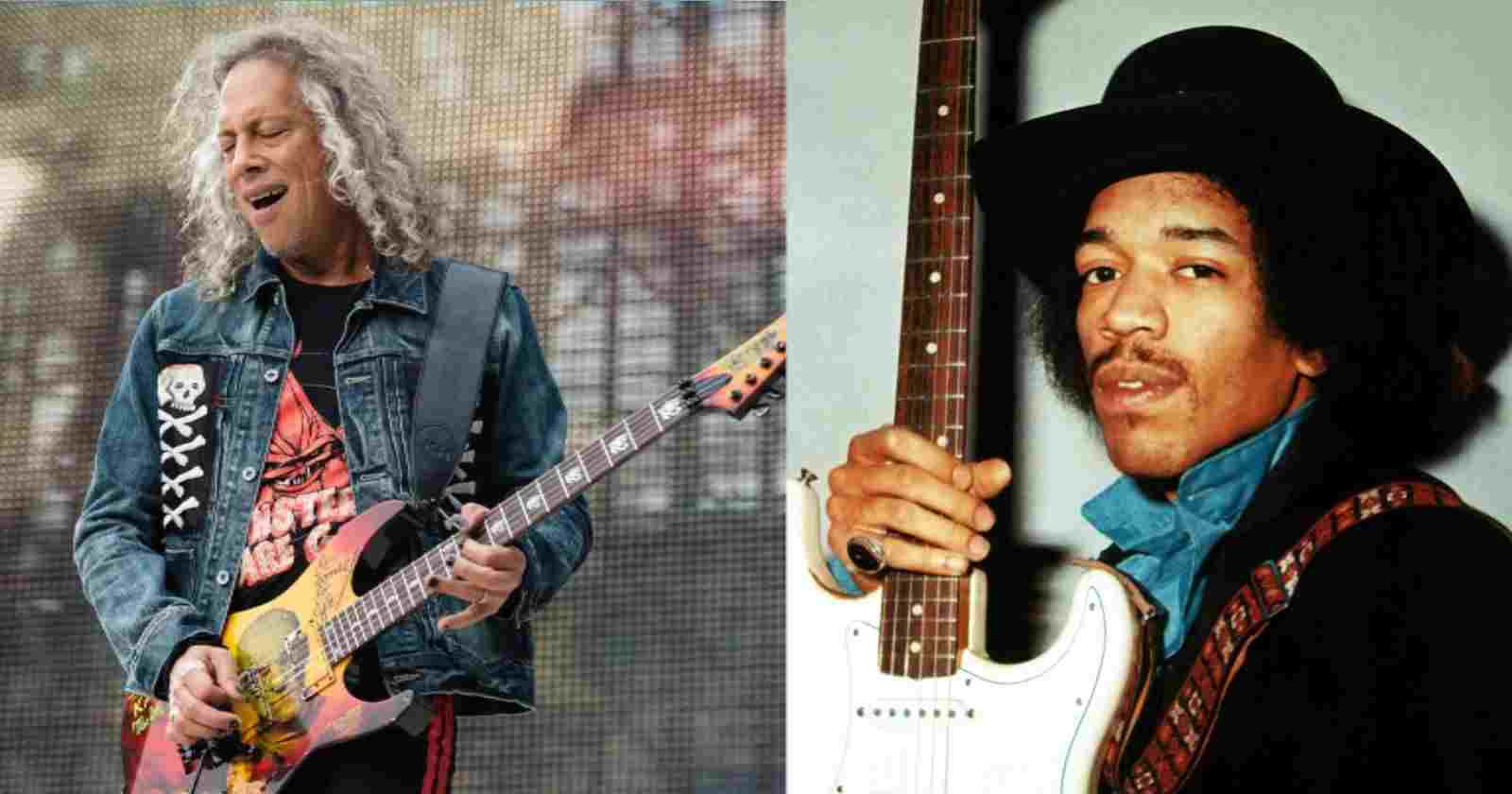 Metallica guitarist Kirk Hammett recalled in the new Greg Prato book “Avatar of the Electric Guitar: The Genius of Jimi Hendrix,” his reaction the first time he heard Hendrix music when he was young.

“The first time I heard Jimi Hendrix, I was too young to figure out how old I was! Because my older brother – who’s 11 years older than me – had the first three albums.”

“So I think I was maybe five or six years old. I remember looking at ‘Are You Experienced’ and looking at Jimi’s jacket, and thinking, ‘This is really exotic-looking.’ And then looking at the ‘Axis’ cover, and seeing all the multiple faces, and seeing those exotic creatures, as well – it actually is a Hindu image,” Kirk Hammett said.

“Fast-forward maybe seven or eight years, I remember sitting with my friends and I was at the third concert I’d ever been to – Led Zeppelin at Day on the Green in 1977. Judas Priest opened the show and Rick Derringer played… and then there was a long wait before Led Zeppelin came on.”

“And the reason for that wait was because John Bonham got in a huge fight with Bill Graham’s security guards backstage and the cops came. There was a huge issue – and there was some contention on whether Led Zeppelin should go on or not. It was literally, like, 90 minutes… which is not cool – for any band.”

“But in that 90 minutes, I remember sitting there, and they were playing songs over the PA. And this one song came on, and I was like, ‘I know that song!’ I was looking around to see if anyone else knew it.”

“I said to my friend’s older brother – who was responsible for taking me and my friend to see Led Zeppelin in the first place, because he was 18 or 19 years old – ‘Who is this?’ And he said, ”Purple Haze’ by Jimi Hendrix, man.’ The last time I’d heard that song I was five or six years old.”

“After the Led Zeppelin concert, I went out and bought ‘Are You Experienced’ and ‘Woodstock.’ I was 14 years old. It was like… a realization. I was already pursuing my own taste – my own musical aesthetic at that point.

“And Jimi Hendrix fell right into the middle of that aesthetic – which was a leaning towards hard rock. Y’know, Led Zeppelin, Deep Purple, Black Sabbath, Aerosmith – that kind of stuff. So, Jimi Hendrix is right in there.

“Theoretically, you can say ‘Purple Haze’ was one of the first songs I’d ever heard. And I’ll tell you, you know what I reacted to most? The tone of the guitar. Just that fuzzed-out Strat through a Marshall sound – it really got to me. And also, the intro [sings the opening guitar part]… that’s so evil! But when I played it on the guitar – when I first started playing guitar – ‘Purple Haze’ was the first song I ever learned how to play.

“But I could never get that octave at the very top right. It never sounded right… until I figured out that I was playing the bass part, and what Jimi Hendrix played was the flatted fifth. You can say that the top of the measure. The A-sharp octave for the bass – Jimi is playing the E note, underneath that A-sharp, which creates a real, real evil sound.

“When I realized that, I thought, ‘This is the key to that sound that Black Sabbath uses, that Deep Purple uses, that all these blues bands use… it’s that flatted fifth! It’s that ‘blues note’ that’s in the pentatonic scale.’

“Some of the first music theory that I had ever been exposed to was from that song. Also, the E7 sharp 9 – the chord that Jimi Hendrix used for ‘Purple Haze,’ ‘Foxy Lady,’ and tons of other songs.  That’s a really complicated chord for someone who was just starting to learn how to play guitar… but I managed to play it.

“We turned it up… and that amp lasted about three minutes before we blew it up. [Laughs] But you know what? We still kept on playing through it. I played ‘Purple Haze’ every day for the next three months. Trying to get it better and better, and trying to do the solo.

“Bit by bit, I would get a note here, a phrase there, get some rhythm things here. And I started branching out on other songs on ‘Are You Experienced’ that were in my skillset. Before Jimi started getting more sophisticated in his chords and his structures and his harmonies and his textures. It was just a perfect primer for me,” Kirk Hammett said.