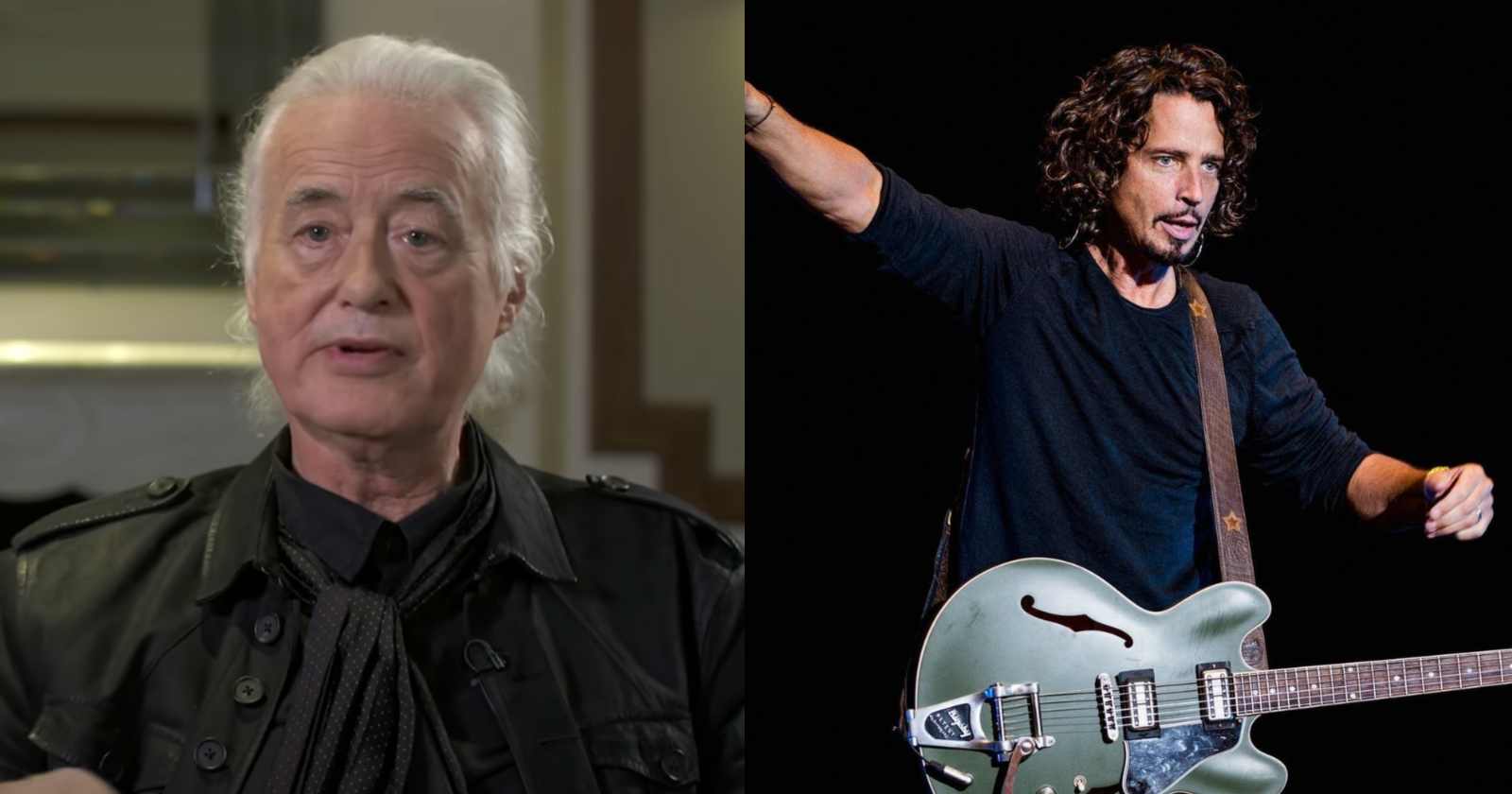 Images from Academy of Achievement and Chris Cornell's Instagram

Jimmy Page started his career as a musician in the early 60s and became a very respected session guitarist, then joining The Yardbirds in 1966 and founding Led Zeppelin in 1968.

He is one of the most influential guitar players of Rock and Roll and over the decades talked many times about the evolution of the music genre. He gave his opinion on many musicians of the most recent generations and one of them is the late Soundgarden and Audioslave vocalist Chris Cornell.

What is Jimmy Page’s opinion on Chris Cornell

In the mid-90s, during a press-conference to promote his project with singer Robert Plant, Page was asked which were some new bands that he liked at the time. One of the groups he mentioned was Soundgarden. Besides the band’s sound, Jimmy Page also loved Chris Cornell’s vocals that he said it was an “incredibly talented” musician.

Cornell’s career was tragically cut short at the age of 52 when he decided to take his own life in 2017. The Led Zeppelin guitarist lamented the musician’s death at the time, saying: “RIP Chris Cornell, incredibly talented, incredibly young, incredibly missed.”

He also sent a message to be played at the Soundgarden tribute show made for Cornell in 2019. “Hello, I’m Jimmy Page and I’m actually over here in London sending this video link to Matt, Kim, Ben. I’m sorry I can’t be with you there this evening, But, believe me, I’m there in spirit.”

“I want to congratulate you for having got this event together to celebrate Chris’ music. I also want to say that the input that you put in to Soundgarden, from the records. Because I got hooked on your music from the first album.”

“But I also came to hear you play, you guys. I was always astonished at the way you all glued together. I mean, it was just really what, for me, bands are all about.. Yeah, have a great evening, have a wonderful evening, this celebration of Chris’ music,” Jimmy Page said.

Only two years before Cornell’s passing, he interviewed Jimmy Page during a special made by Guitar World. The late vocalist told in Page in that conversation that he allowed him to have a career. For Cornell, the British band showed the record companies that there was another market besides hits and tracks to be played on the radio.

(Transcribed by Rock and Roll Garage) “You touched on the idea that there was something besides hit radio, for example The Yardbirds. All music and especially British music at the time. It was chart driven and hit driven. Right at this time when maybe there is a format to do something that it isn’t hit driven, you seem to kind of walk right into it.”

“Me as a fan, for example, I didn’t know what was going on. I didn’t know that you were actually doing something that would allow someone like me years later to have a career doing what I want. Not having to have hit driven Rock and Roll music. It appears to me, kind of been going through your story, that you did it. So thank you” Chris Cornell said.

Chris Cornell loved Led Zeppelin and during his career covered many bands of the British Hard Rock group. In 2010, he re-recorded “Whole Lotta Love” with Carlos Santana. The track was releasead on Santana’s studio album “Guitar Heaven”.

Cornell performed that track many times during his solo career concerts and also other Zeppelin songs like “Immigrant Song” and “Thank You”. The latter one, he even explained the reason why he picked that track to play in an interview with Howard Stern (Transcribed by Rock and Roll Garage) in 2011.

“To me it was kind of almost uncharacteristic of other stuff of that album. It sounds like a 60s Pop song to me. The way that they have arranged. It’s almost that would’ve been, with any other band, that would have been their biggest hit. But because it was Led Zeppelin and the album was so unbelievable, it’s their first album, it almost kind of passed over,” Chris Cornell said.

Led Zeppelin reunited in 2007 for the first time in 27 years with a concert at the 02 Arena in London. The band had came to an end in 1980 after the tragic death of the drummer John Bonham. The reunion goal was to pay tribute to the late record executive Ahmet Ertegun.

Besides Page, Plant and Jones, the band had John Bonham’s son Jason Bonham on drums. After that show, the guitarist Jimmy Page and bassist/keyboardist John Paul Jones said expressed their will to continue to tour. Since Robert Plant wasn’t interested they decided to try other vocalists.

One of the rumours that appeared at the time was that Chris Cornell was one of the singers they were interested. In an interview with Tampa Bay back in 2016, Cornell recalled that once Jimmy Page came to see him live in concert in London and he was asked by the interviewer if he was invited to join Zeppelin. He replied, saying: “He never did that. But if he did, yeah, I would have to entertain it.”

During his solo career Chris Cornell released four studio albums. He also was responsible for the famous 007 theme song “You Know My Name”. The track was featured in the successful movie “Casino Royale” (2006). That film was the first one to feature Daniel Craig as James Bond.

With Soundgarden he recorded 6 studio albums and with Audioslave 3 studio records. He still considered by many specialized magazines one of the greatest singers of all time.