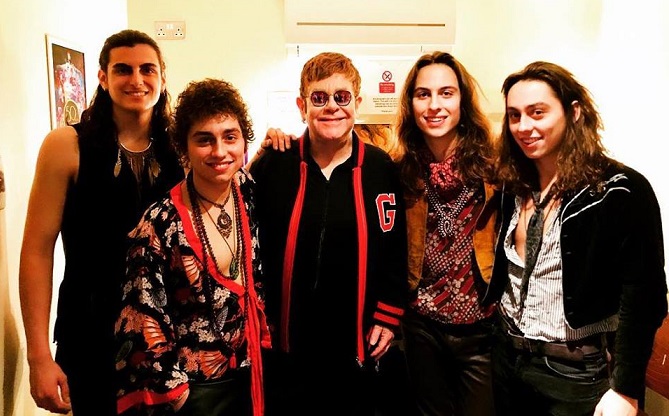 Guitarist Jake Kiszka revealed in an interview with Loudwire that he received an advice from Elton John after playing at a party that the iconic singer and pianist annually promotes in London, England.

At the time, Greta Van Fleet was invited to do his full show. However, the host also took the stage and played along with them the songs “The One” and “Saturday Night’s Alright For Fighting”.

Watch their performance below:

After the performance, Elton John gave the boys a musical advice.

“He came back after the show and he was analyzing it,” said Kiszka.

Elton John said: “There’s not much I can say on the performance itself,” before offering a snippet of advice on how to adjust one of their biggest songs. “The beginning of ‘Highway Tune’ … maybe extend the beginning of it and make it more dramatic or something like that”.

“You don’t need anyone other than yourself to give permission in order to do something but when Elton John says, ‘Flaunt what you’ve got. Show ’em what you’ve got,’ then it kind of makes an impression. I think at that point that was one of the things that he imparted on us. After that I just lost the shirt underneath. He’s like, ‘Just flaunt what you’ve got,’ and I’m like, ‘All right. Rock ‘n’ roll then!”