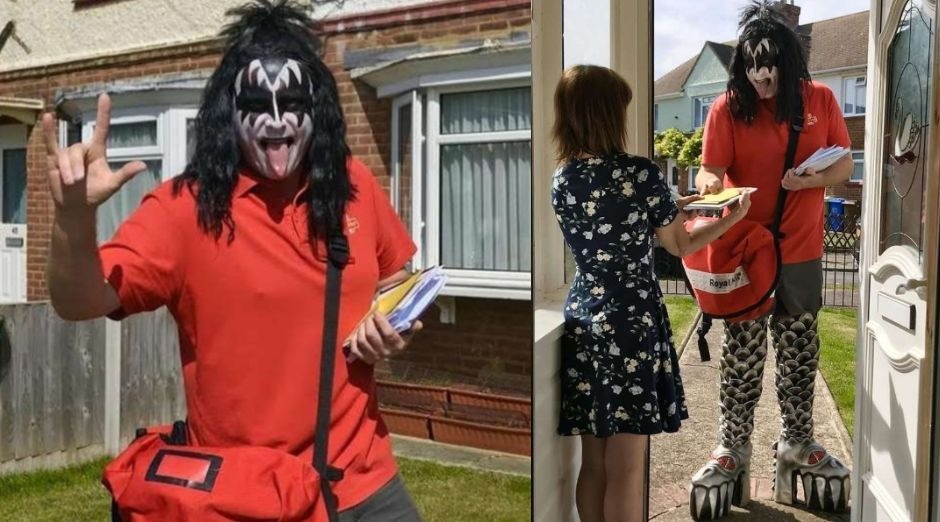 What if Gene Simmons was the mailman in your city? Well, in Sheppey, England the mailman Gary Underdown turned himself into Kiss bassist wearing a wig and “The Demon” make-up to bring joy to people during quarantine.

He was photographed and praised by the real Gene Simmons and Kiss in their social media:

The mailman that is from Rainham and has been working on Sheppey for more than 2 years said: “My phone went crazy. I couldn’t believe how crazy it went. I have been a KISS fan since I came out of the womb. To get such a response, I think it’s brilliant. If someone can have a laugh with it, that’s what it’s all about.”

When asked why he decided to become “Gene Simmons” mailman, he said:

“I thought I would try and get everyone’s mood up. Everyone’s a bit down in the dumps with what’s going on – it just lifted them up again. I did it for the first time about a month ago and got such a good reaction, I thought I’d do it again.” 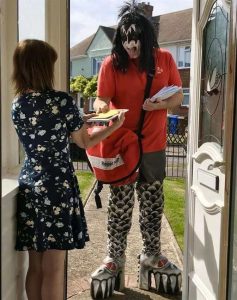 I’ve done it about four times now and people’s reactions are great. You get a few who are like ‘oh my God’, that’s fantastic. And some people have been asking for a picture. It’s just a bit of a gimmick and it’s made a few people smile. There’s a few different posties around the country doing a few different things so I thought I would do it too.

“I’ve only been able to wear the full make-up and wig on my rounds though, I couldn’t walk 10 miles in the destroyer boots – but I have got a pair.”

He is a big Kiss fan

“My dad has been a fan since day one in the seventies,” he said. “They sing all about believing in yourself and doing the best you can in your life, and about having a good time because you only live once – that’s what I’m all about. It’s just a bit of a gimmick and it’s made a few people smile. Nothing really gets me down. Even this year, with what’s going on, there’s nothing we can do about it, we have just got to march on.”

And wasn’t the first time Gary dressed like Simmons. He put on the full costume, including destroyer boots in order to help to raise cash for Help For Heroes. The inciative raise about £5,000. The project supports wounded, injured and sick veterans and their families. The mailman also performed with the tribute band Hotter Than Hell.