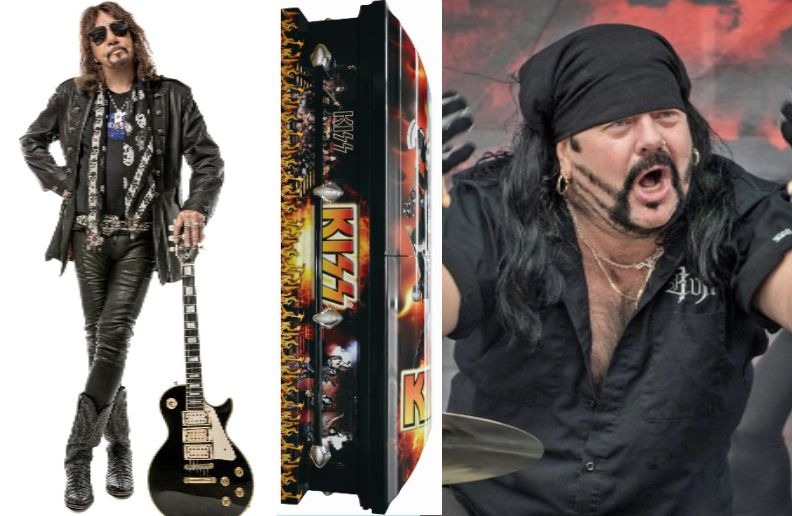 Talking on Never Not Funny, classic KISS guitarist Ace Frehley talked about when he attended the late Pantera drummer Vinnie Paul burial and saw the KISS coffin that was used.

“It was crazy, because I had a speech planned, and it went over perfectly. In the church, I’m at the podium, and I spoke for about 10, 12 minutes. And then we get out to the cemetery, and he’s in a KISS casket.

“Vinnie Paul got buried in a KISS casket, and I see my face on the casket, and it weirded me out. But above and beyond that, his father said to me, ‘Would you say a few words by the casket?’

“And I had nothing prepared. I don’t know where it came from. Somebody beamed it into my head. I came up with the line… Everybody was looking at me. I said, ‘I’m assuming everybody here has seen the movie ‘The Wizard of Oz’.’

“And I think nobody knew where I was going with that, but they all nodded. There was maybe a hundred and fifty people there, 200.

“And I said, ‘Well, remember the part at the end when they discovered the wizard was a fake and he was talking to the Tin Man. And he used the line, ‘It’s not how much you loved but how much you were loved by others.’ And I said, ‘Vinnie was that kind of guy. Everybody loved Vinnie.”

“I go, ‘He’s up in heaven right now – rock and roll heaven – playing with his brother Dimebag.’ I said, ‘Thanks so much for having me here. And God bless you.’ But I don’t know where that came from.”