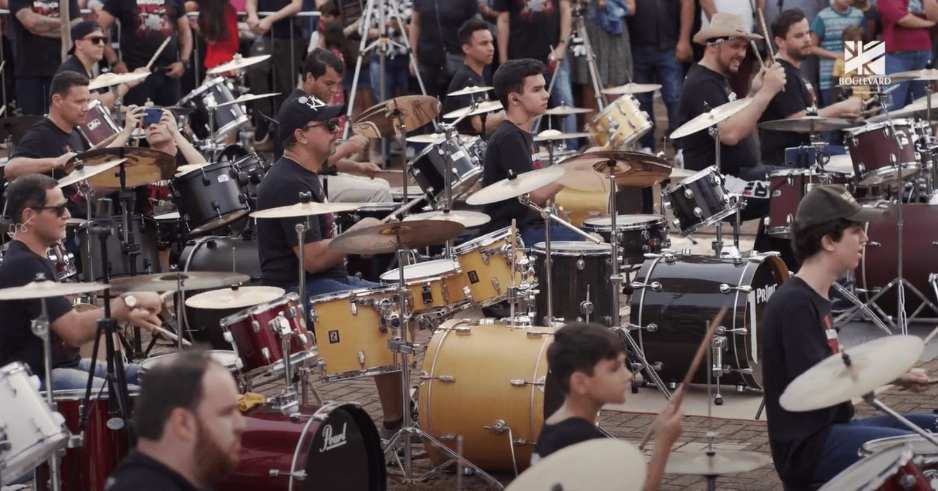 90 drummers performed together, at the same time Rock and Roll classics at Boulevard Londrina Shopping mall in Londrina, Paraná. The event organized by the commercial center had professional and aspiring drummers sharing their talent and learning more about the instrument.

Watch about 90 drummers playing Metallica, Queen, AC/DC and more classics at the same time in Brazil:

The Rolling Stones “(I Can’t Get No) Satisfaction”

The track became one of their most famous tracks, which have been on their setlist ever since.

The opening track of Metallica‘s self-titled 1991 album, also known as “The Black Album”, “Enter Sandman” is also one of their most successful songs that helped the record to become their best-selling effort.

The title track of AC/DC‘s “Back In Black” album, the song helped the record to simply one of the best-selling albums of all time with an estimated amount of 50 million copies sold worldwide.

The song composed by Queen with the purpose of giving the audience a chance to “play” the song with the band during the live performances, “We Will Rock You” was featured on the band’s 1977 album “News Of The World”.

One of the most famous Rock and Roll songs from the early 00s, “Seven Nation Army” was first released by The White Stripes on their 2003 album “Elephant”. The guitar riff is often recalled as one of the most memorable from the last decades.