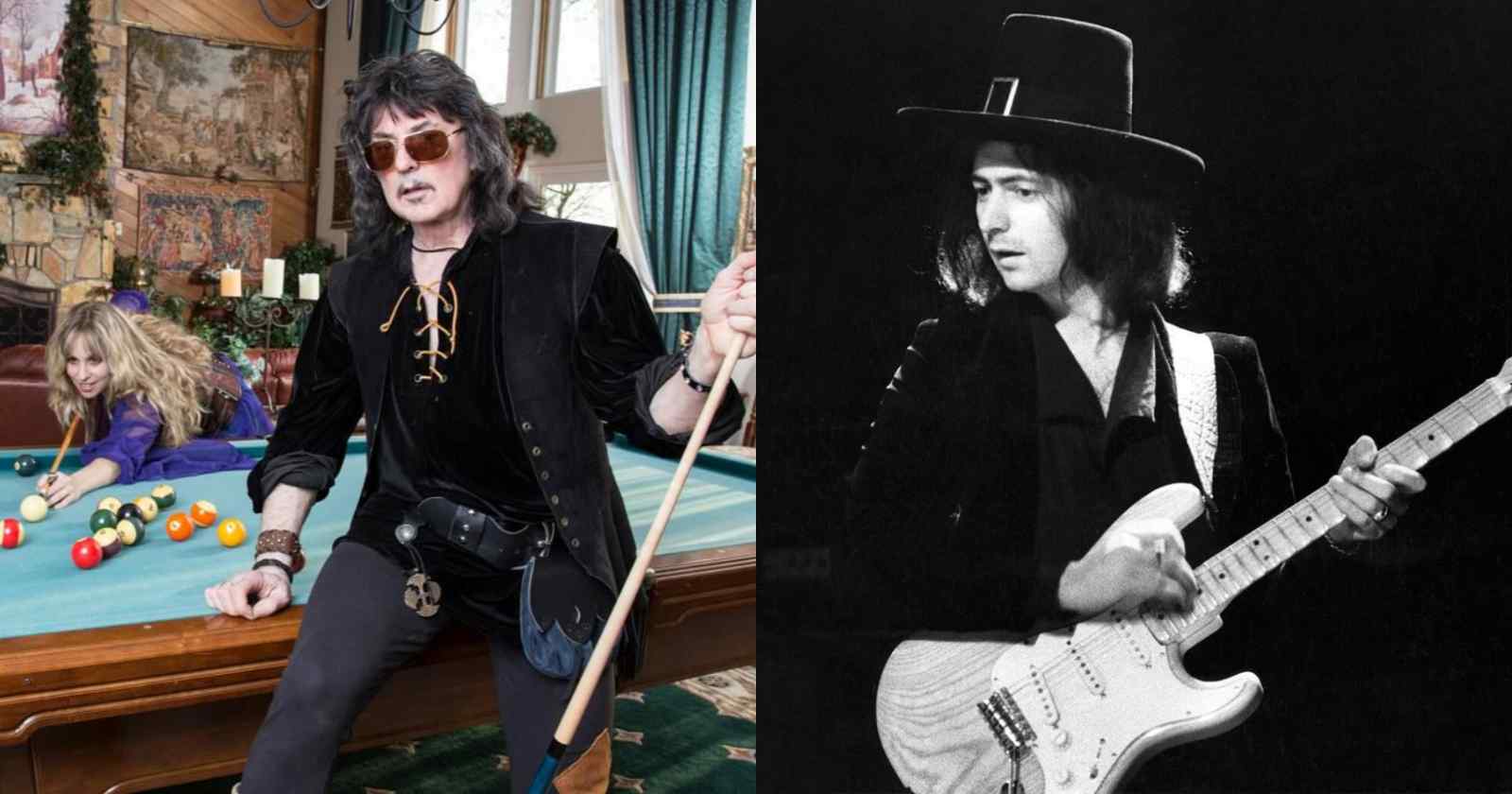 Guitarist Ritchie Blackmore (Deep Purple, Rainbow) is considered one of the best of all time who inspired musicians all over the world. In an interview with Classic Rock back in 1975, Blackmore revealed which musicians where an inspiration for him when he was young.

The 8 guitarists that Ritchie Blackmore listed as influences:

“My first influence, believe it or not, was Tommy Steele. I saw him jumping about with a guitar around his neck and I thought, that’s what I want to do. So I picked up the guitar and started prancing about like he did. Then I found out more about guitarists and started to emulate certain players.”

“I think the first one was Hank Marvin of The Shadows. I used to play Apache, which he recorded as a single with The Shadows. Then I heard about this guitarist who was living in the Hounslow area, where I lived at the time, and his name was Jimmy Sullivan. When I saw Jim I thought it’s either a case of giving up or trying to compete. I was always trying to steal his guitar solos.”

“Les Paul, Django Reinhardt, Wes Montgomery, Cliff Gallup who used to play with Gene Vincent, Scotty Moore who played with Elvis Presley. But at the moment I don’t have so many idols who play guitars. I prefer listening to violinists, cellists. For many years I’ve been tending towards classical, although I don’t play classical guitar in the accepted orthodox manner. I also listen a lot to medieval music. I’ve taken up playing cello. Trying to, anyway. Even so, I still consider myself to be more or less a rock guitarist. Playing rock is definitely a challenge because of the limitations involved, such as the chord structures, the timings, and of course the excitement and the feeling of power on the stage, plus the money,” Ritchie Blackmore said.

Born in London back in 1936 Tommy Steele is considered the first English teen idol and Rock and Roll star and reached the first position in the charts in 1957 with “Singing The Blues”. He became famous in the UK as the frontman of The Steelmen, after their first single, “Rock With the Caveman”, reached number 13 in the UK Singles Chart in 1956. Many British singers at the time would pick known hit records from the United States, record their cover versions of these songs, and release them in the UK before the American versions could enter the charts. Most of Steele’s 1950s recordings were covers of American hits, such as “Singing the Blues” and “Knee Deep in the Blues”.

Hank Marvin is the lead guitarist of The Shadows, famous British instrumental bands that inspired a whole generation of famous guitarists. Among their most successful songs are “Apache”, “Summer Holiday” and “The Young Ones”.

Also know was Big Jim Sullivan, the guitarist is often remembered as one of the most requested session guitarists in the United Kingddom during the 60’s and 70’s, having performed in more than 750 charting singles during his career.

Back in 2012 when Sullivan died, Ritchie Blackmore Blackmore talked in his Facebook page about the musician, saying:  “I first met Jim Sullivan in 1958. He was introduced to me by my sister-in-law’s brother. We both lived in the same area: in Middlesex, Cranford. He was playing with Marty Wilde And The Wildcats, he showed me another level of playing. He was probably the most advanced guitarist in the London area.”

Besides being a jazz, country and blues guitarist Les Paul was also an inventor. He was one of the pioneers of the solid-body electric guitar and the prototype called “The Log” was the inspiration for the famous Gibson Les Paul guitar.

He is also recalled for many recording inovations like overdubbing and delay effects. Besides a different playing style, creating licks, trills, chording sequences, timing and fretting techniques that inspired many guitarists.

Born in Belgium back in 1953 Django Reinhardt was a Jazz guitarist and composer. Most popular compositions have become standards within gypsy jazz, including “Minor Swing”

Reinhardt also was a major inspiration for Black Sabbath’s Tony Iommi (Who lost the top of his fingers in an accident) since the fourth finger (ring finger) and fifth finger (little) of Reinhardt’s left hand were badly burned in a fire and he had to learn again how to play without using them too much.

Born in Indianapolis back in 1923, Wes Montgomery was a Jazz guitarist know for his unusual technique of plucking the strings with the side of his thumb. Alos for his extensive use of octaves, which gave him a distinctive sound.

Known for being the guitarist in Gene Vincent’s band, Cliff Gallup played on 35 song with the musician, including his biggest hit “Be-Bop-A-Lula”. He quit the band in 1956 because as a married man he didn’t want to tour. He returned to the band in the same year but only to record with them in the studio. In addition, he was inducted into the Rockabilly Hall of Fame and the Rock and Roll Hall of Fame.

Born in Tennessee back in 1931, Scotty Moore was a guitarist and engineer who formed The Blue Moon Boys back in 1954, he were Elvis Presley‘s backing band.  Moore was Elvis’ studio and touring guitarist from 1954 to 1968. He was inducted into the Rock and Roll Hall of Fame in 2000