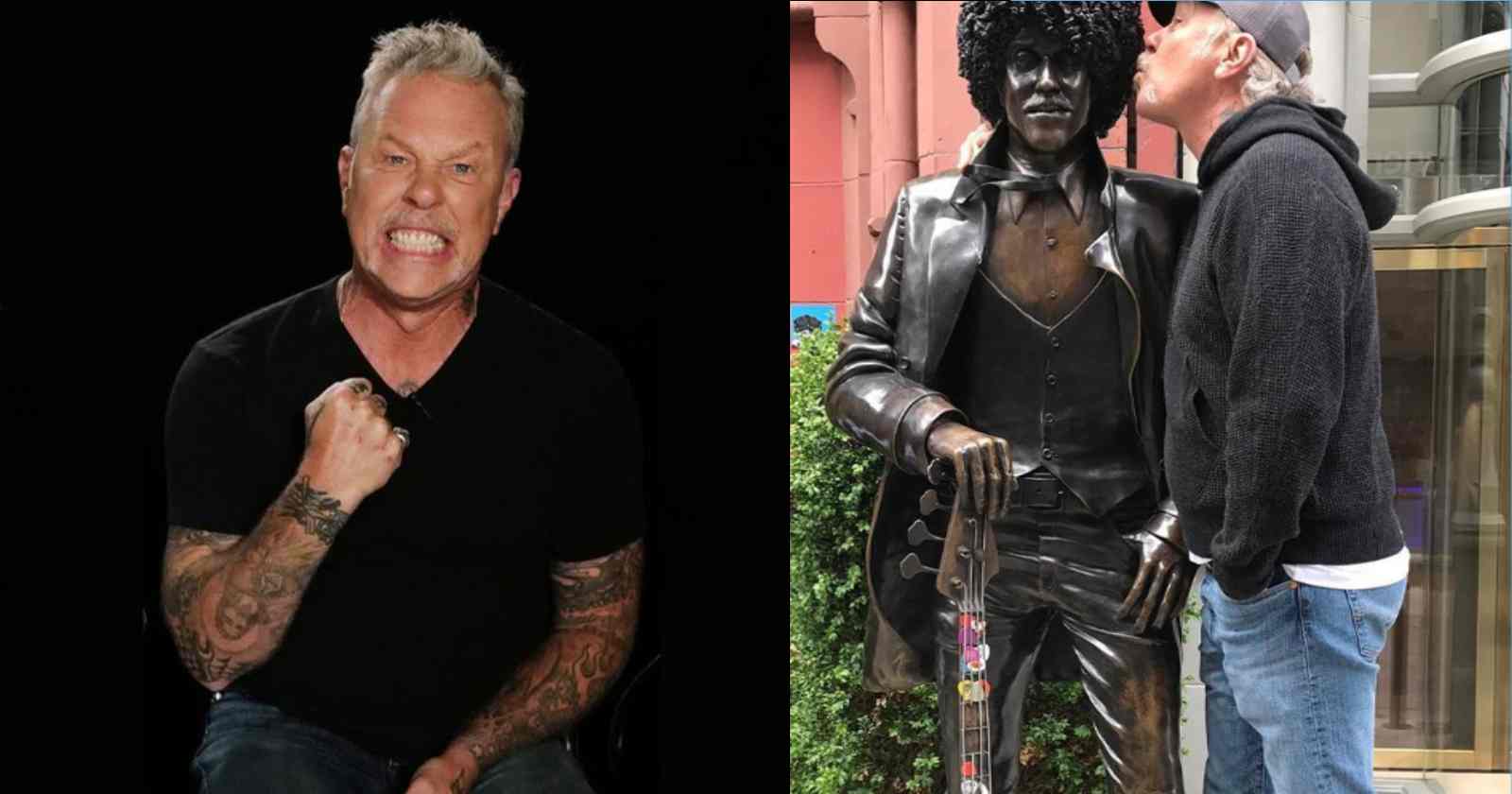 Metallica guitarist and singer James Hetfield is also responsible for many lyrics of famous songs of the Thrash Metal group. Back in 2016 when drummer Lars Ulrich was hosting a simposium at the Berkeley University in California, he invited Hetfield as a guest. During the event, Hetfield was asked about how he used to write lyrics and he revealed some of his favorite songwriters (Transcribed by Rock and Roll Garage).

4 songwriters that James Hetfield listed as some of his favorites

“Uh… I listen to Hair Metal, that makes me angry, so… (laughs). It comes from anywhere, a line from a movie, listening to talk radio, its kind of anywhre really, reading a stuff. As far as lyricists go, I mean there are some that I really admire and like to tap into.”

“I just wish that I could be as good as Tom Waits, Phil Lynott (Thin Lizzy), Nick Cave, Leonard Cohen, a lot of great lyricists. It is really cool to read up on them and hear how they come up with their stuff.”

Born in Pomona, California back in 1949, Tom Waits is a musician, composer, writer and actor. His lyrics often focus on the underbelly of society and are delivered in his trademark deep, gravelly voice.

In an interview with Guitar World back in 1996, Hetfield talked about Tom Waits, saying: “I’ve been really focusing on lyricists — as opposed to people who just sit down and crank out some words for a song — who write fucking poems and then put music to them.”

“I wanted to understand other people’s ideas about how to write lyrics. Nick Cave’s Murder Ballads are the coolest, and I dig all the Tom Waits stuff. I ‘ve even listened to some Leonard Cohen. I mean, I hate the fucking music. But his lyrics are very cool. You do a lot more “acting” with your singing.”

Tom Waits was inducted into the Rock and Roll Hall of Fame in 2011 by Neil Young, who said in his speech that: “Tom Waits is indescribable and I’m here to describe him”.

One of the best Irish musicians of all time, Phil Lynott was Thin Lizzy‘s singer, bassist and main lyricist. Lynott is recalled for his imaginative lyrical contributions about class tales and other characters inspired by personal influences and Celtic culture.

In an interview with Hot Press magazine back in 2011, James Hetfield recalled Phil Lynott’s death, saying: “It was one of those moments that was so sad. You just wondered, ‘Why did God take such a creative person?’. But I think there was a purpose to it all. Because the struggles that he wrote about: with drugs, drink, ethnicity, all of those things. They almost speak louder now he has passed.”

“For me, going through the struggle with alchohol and addiction in general, just going back and listening to his lyrics it’s like, ‘Wow, I know what he’s talking about now’. So I love that.”

Known for his baritone voice Nick Cave was born in Warracknabeal, Victoria, Australia back in 1957. Besides a musician he is also a screenwriter, author and actor. Metallica covered Nick Cave’s “Loverman” on their 1998 covers album “Garage Inc”.

In an interview with the Irish Times in 1998, Hetfield explained why they decided to record a Nick Cave song:  “We’re big fans. I think we pulled it off with that song; we managed to retain the spark of the original whilst. Still adding our own identity and our own little touch to it”.