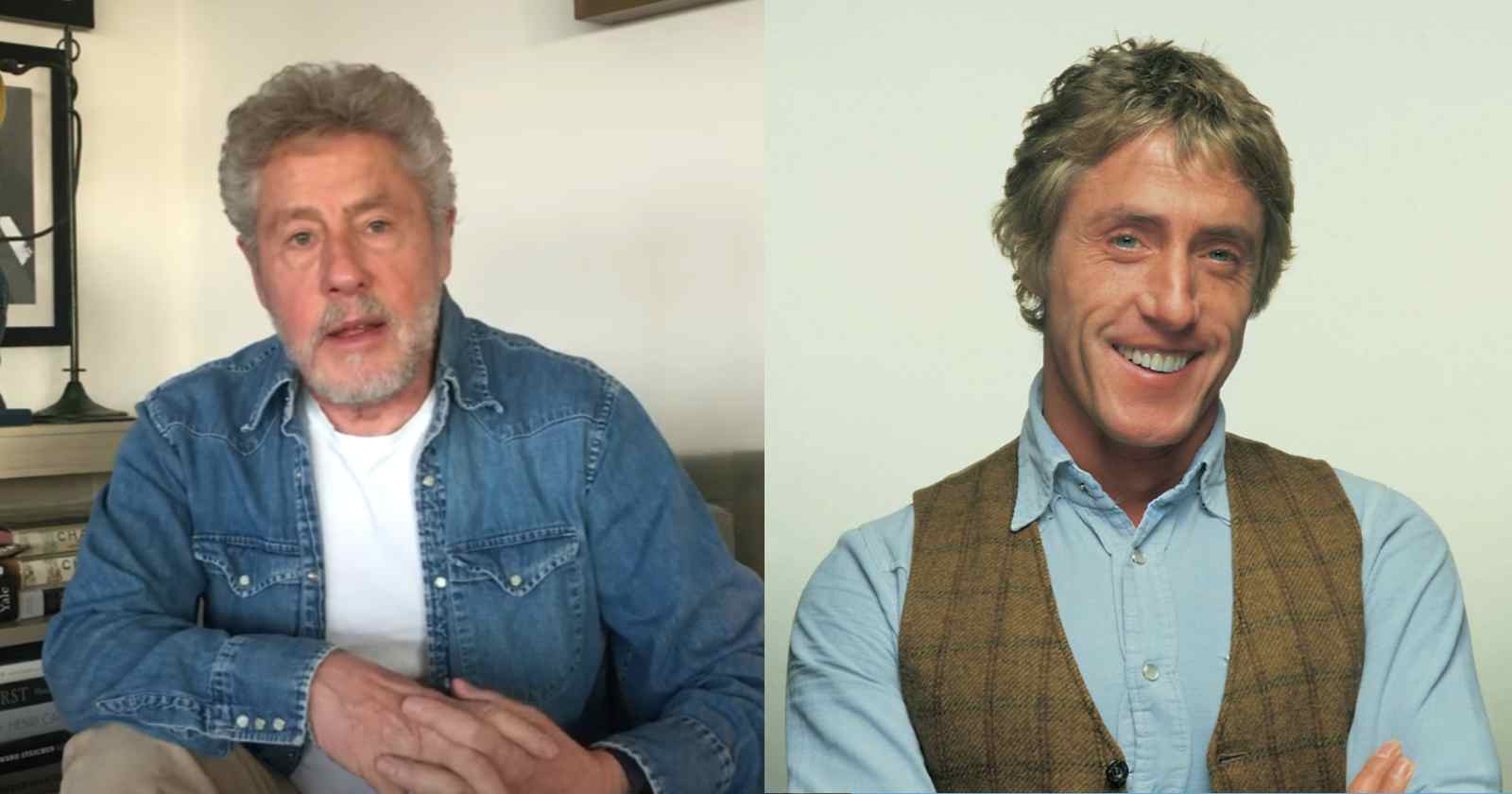 The Who legendary singer Roger Daltrey is one of the most important voices in Rock and Roll music and helped to create songs that are the favorite ones from fans worlwide. In an interview with BBC Radio 2 show “Tracks Of My Years” back in 2018 (Transcribed by Rock and Roll Garage), the vocalist listed some of his favorite songs and explained why they are so important to him.

Roger Daltrey was inducted into the Rock and Roll Hall of Fame as a member of The Who back in 1990 by U2’s Bono, who said in his speech: “More than any other group that ever was, The Who were our role models”.

Buddy Holly and The Crickets “That’ll Be The Day”

“When I first heard this song, that sound that Buddy Holly got on guitar, that really drag my ear into ‘I got to make an electric guitar’, because prior to this track is was mocking around on a Spanish acoustic guitar and it was the sound of this record, I never forget it, that opening”.

“He spoke for the youth of the time, his lyrics were so simple but then so astute and considering his career, that was only like two years and an amazing amount of really, really great songs. To go from ‘That’ll Be The Day’ to ‘Raining in My Heart’, what a progression as a musician,” Roger Daltrey said.

Buddy Holly not only influenced Roger Daltrey but many other important musicians like Paul McCartney. The American musician born in Lubbock, Texas in 1936 died too soon at the age of 22 in 1959, in a plane crash with two other famous musicians: Richie Valens and The Big Bopper. February 3, the day of their death is still known as “the day that the music died”.

Harry Nillson “Without You”

Harry Nillson was such a great talent and I knew Harry, a very funny guy. There is something about this record, he’s got something going on in his voice that really gets me. A beautiful voice and he was a very funny man. There is something about this song that really melts me. Harry was one of the best songwriters out there, the production on this record is extraordinary, such a great sound,” Roger Daltrey said.

Born in Brooklyn, New York back in 1941, Harry Nilson achieved the height of his success in the early 70s with songs like “Everybody’s Talkin'”, “Without You”, “Coconut” and “Gotta Get Up”. He died too soon at the age of 52 back in 1994 when he was working on his last album, later released in 2019 named “Losst and Founnd“.

“I’ve chosen this one from Elvis because is one you don’t hear him play much. I mean, he played much, you always hear the early ones, he did ‘Heartbreak Hotel’ and all those things but there is something about ‘Don’t Be Cruel’ that I really like. It’s just got a quality. But Elvis was again, the one of the firsts that kind of turned our heads and we all wanted to be Elvis. We all immediately rushed out and got a bar of soap to to slip our hair back because we couldn’t afford a cream (laughs). Of course we thought we could look like Elvis but non of us did. But again, his voice was wonderful, he did had a fabulous voice,” Roger Daltrey said.

The Band “The Weight”

“What an album! I’ve met met The Band with Bob Dylan when they supported him on his tour in Belfast and I thought ‘This is gonna be something’ but when I heard this album ‘Music From The Big Pink’ (1968), this song in particular (The Weight), the musicianship, there is a relaxed looseness, just the sound is so wonderful,” Roger Daltrey said.

“I just love the energy of this record. Tina, what a performance. I worked with Tina on Tommy, she played ‘The Acid Queen’ and wanted to tell you, I was so much in character, because I was playing this ‘Deaf, dumb and blind’ kid and I had to lay there for probably 5 or 6 hours on the floor with Tina standing over me while she was doing her song and for the life of me I can’t remember one piece of visual. I was so frightened to even talk to her and I was such a big fan. So I love this song and she obviously loved as well, because she came from Nutbush,” Roger Daltrey said.

One of the most successful American duos, Ike & Tina Turner were active from 1960 to 1976, when Tina focused only on her solo career. They were inducted into the Rock and Roll Hall Of Fame back in 1991 by Phil Spector.

Bee Gees “To Love Somebody”

“Again, it’s the sound of the voices of the Bee Gees and they are great guys. They were a wonderful bunch of guys, really, really funny guys. Maurice and Barry together when they were on a roll, would be extremely funny and Robin was wonderful, he had a voice to die for. I just loved this song,” Roger Daltrey said.

Formed back 1958 by brothers Barry, Robin and Maurice Gibb, The Bee Gees are one of the best-selling groups in history that changed the Pop music in the 70s. Some of their most famous songs are “Stayin Alive”, “More Than a Woman”, “How Deep Is Your Love” and “Night Fever”.

“This is a song I just remember there was something about it. Again I loved the sound of his voice but it was also kind of the first time I’ve heard a synth being used in a way that kind wans’t all over it, but kind of gave the whole track a different feeling. I don’t know how popular this record was at the time but a lot of people don’t know who Gary Wright was but I love this song. It had a special quality,” Roger Daltrey said.

Born in Cresskill, New Jersey, back in 1943, Gary Wright is best known for the hit that Roger Daltrey picked and for the track “Loves Is Alive”.

His breakthrough album, The Dream Weaver (1975), came after he had spent seven years in London as, alternately, a member of the British blues rock band Spooky Tooth and a solo artist on A&M Records. He also played keyboards on George Harrison’sfamous album “All Things Must Pass” (1970).

The Beatles “Love Me Do”

“You got to have this song, because when we first heard that come out from radio Luxembourg, not BBC, they wouldn’t play. But again, the sound of ‘Love Me Do’ was the key ingnition that stared the swinging 60s and the whole business, the whole music industry changed. They had an extraordinary sound, that harmonica, the sound of the harmonies together was so different of everything that ever that had been before,” Roger Daltrey said.

The most successful Rock band of all time, The Beatles changed Rock and Roll in the 60s, bringing a swinging sound and inspiring other musicians to compose their own songs and write their own lyrics.

Martha & The Vandellas “Dancing In The Streets”

“The Who used to play this track, but I could never sing it as good as Martha (laughs). I think this track really sums up Detroit of that period. The motor city in those days was a very special place. It’s totally diferent now of course. I think that Martha & The Vandellas singing this really sums up just the exuberance of the American car industry of the 60s, the pinnacle of it’s being,” Roger Daltrey said.

Formed in Detroit, Michigan back in the 50s, Martha & The Vandellas charted over 26 hits like “Nowhere To Run”, “Love Is Like A Heat Wave” and “Jimmy Mack”.

Traveling Wilburys “End Of The Line”

“Everytime I listen to this track is quite obvious that this is a bunch of musicians having the best of times. If you watch the video to it, it’s just so joyous. I love this song. I mean, Jeff Lynne, Roy Orbinson, Tom Petty, George Harrison, Bob Dylan, I mean how many awards you want? (laughs). And they were all smiling and laughing, just having a great time. It’s got so much joy to it, there is no ego involved in it,” Roger Daltrey said.

Active from 1988 to 1991, The Traveling Wilburys released two successful albums that had hits like “Handle With Care”, “Last Night” and “End Of The Line”.