Guitarist Zakk Wylde talked about the most importante thing a guitarist need to have to be good.

“Vibrato plays a huge part in this – if you have great technique but terrible vibrato, it ruins the whole thing. Whenever you listen to any of the great players, from Neal Schon to George Lynch, Warren DiMartini, Vivian Campbell, Angus Young, Paul Kossoff, John Sykes, Eddie Van Halen or any of those cats… they all had great vibrato. 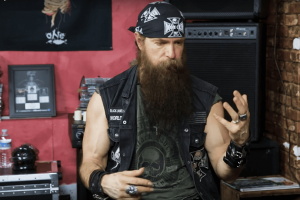 “Whether it was faster or wider or whatever, it was always ear-pleasing. Ask any of those players I mentioned and they’ll all tell you that vibrato can’t really be taught – it’s an element that’s just innately inside you and everyone will naturally have a different feel.

“Mine is more of a smashing into the song than a slowly creeping-in approach. Even if I play on something mellow, like on ‘Mama I’m Coming Home,’ the vibrato might not as silly as it would be on ‘Miracle Man,’ but it still sounds like me. That’s how vibrato plays a huge part in your phrasing.

“On the Generation Axe tour with Nuno Bettencourt, Yngwie Malmsteen, Tosin Abasi and Steve Vai… I’d hear the soundcheck and know within three notes who was plugged in. It’s all in the vibrato, each of them had their own signature take on it.”