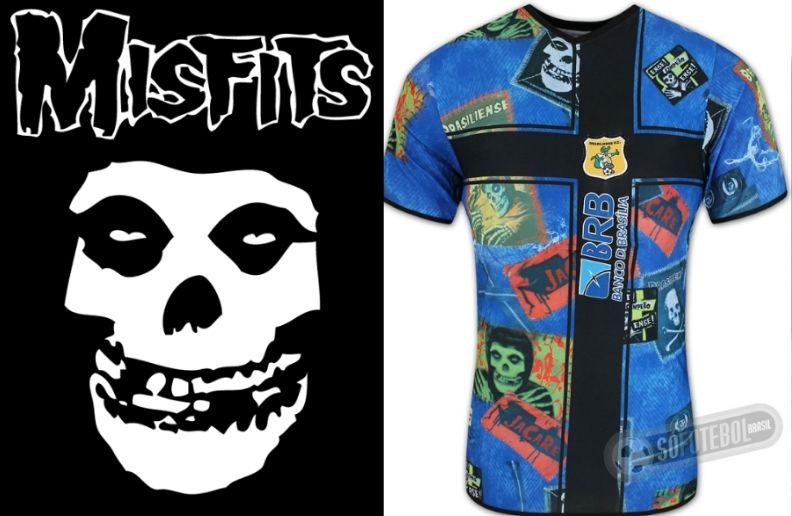 In 2010, during the celebrations of the Rock Day celebrated annually on July 13 in Brazil, the team called Brasiliense, from Taguatinga, in the Federal District, decided to make a shirt to paid tribute to the punk rock band Misfits.

The result is the image below, where the team put a series of images of the Misfits mascot, the Fiend Skull, under a blue background  and is all very messy. The suggestion of the art with the legendary skull was given by a fan on the internet. 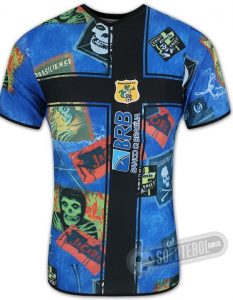 Brasiliense Futebol Clube is a Brazilian soccer club, based in Taguatinga, in the Federal District. Currently competes for the D Series of the Brazilian Soccer Championship.

The Brasiliense was founded in 2000, and before completing 2 years of existence, managed to reach the final of the 2002 Brazil Cup.

He is the holder of the largest consecutive series of consecutive state titles in the Midwest with 6 titles won between 2004 and 2009. The club is known by its nickname “Jacare” (Alligator) its colors are green, yellow and white, in reference to colors of the flag of the Federal District.

The Misfits are an American punk rock band often recognized as the progenitors of the horror punk subgenre, blending punk and other musical influences with horror film themes and imagery. Founded in 1977 in Lodi, New Jersey, the original lineup consisted of vocalist and keyboardist Glenn Danzig, bassist Jerry Only, and drummer Manny Martínez.

Danzig and Only were the only consistent members throughout the next six years, during which they released several EPs and singles, and with Only’s brother Doyle as guitarist, the albums Walk Among Us (1982) and Earth A.D./Wolfs Blood (1983), both considered touchstones of the early-1980s hardcore punk movement. The band has had several lineup changes over the years, with bassist Jerry Only being the only constant member in the group.