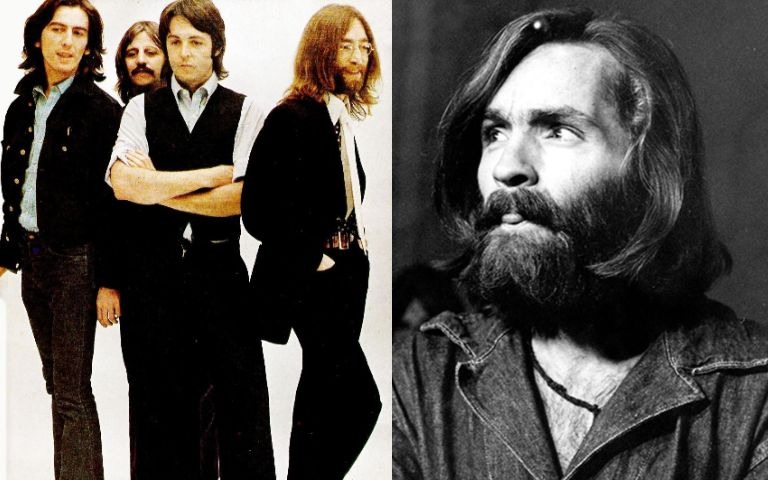 The Beatles classic song “Helter Skelter” is considered by many the first Heavy Metal song of all time, a true mark on rock music, but unfortunately is also present on a horrible crime committed by The Charles Manson Family. Manson Claimed the song was the main inspiration for his idea and the band members commented on the crime at the time:

Ringo Starr said the use of the song by Manson:

“It was upsetting. I mean, I knew Roman Polanski and Sharon Tate and – God! – it was a rough time. And it stopped everyone in their tracks because suddenly all this violence came out in the midst of all this love and peace and psychedelia. It was pretty miserable, actually. And everyone got really insecure – not just us, not just the rockers. But everyone in LA felt: ‘Oh, God, it can happen to anybody.’ Thank God they caught the bugger.”

“Everybody was getting on the big Beatle bandwagon. The police and the promoters and the Lord Mayors – and murderers too. The Beatles were topical and they were the main thing that was written about in the world, so everybody attached themselves to us, whether it was our fault or not. It was upsetting to be associated with something so sleazy as Charles Manson.”

“Another thing I found offensive was that Manson suddenly portrayed the long hair, beard and moustache kind of image, as well as that of a murderer. Up until then, the long hair and the beard were more to do with not having your hair cut and not having a shave – a case of just being a scruff or something.”

The guitarist and singer was quite horrified that Manson may have used his song “Piggies” as a justification for the Tate-La Bianca murders. Rosemary and Leno La Bianca were both stabbed to death with forks. Probably a reference to Harrison’s satirical lyrics about piggies “clutching forks and knives to eat their bacon.” When Vincent Bugliosi asked Harrison for permission to quote the lyrics to “Piggies” in the book Helter Skelter, Harrison refused.

Paul McCartney also lamented on the crime and crazy motivation:

“Charles Manson interpreted that Helter Skelter was something to do with the four horsemen of the Apocalypse. I still don’t know what all that stuff is; it’s from the Bible, Revelation – I haven’t read it so I wouldn’t know. But he interpreted the whole thing – that we were the four horsemen, Helter Skelter the song. And arrived at having to go out and kill everyone.”

John Lennon said that the crimes had nothing to do with The Beatles and specially with him:

“All that Manson stuff was built around George’s song about pigs and this one [Helter Skelter], Paul’s song about an English fairground. It has nothing to do with anything, and least of all to do with me.”

Back in 1968 Charles Manson formed an alternative community at Spahn Ranch, near Los Angeles. They survived stealing and scavenging food. Charles had a dream to record a movie or an album. He believed that a great racial war would take place, where blacks would win, but would find themselves lost because they were innately unable to dominate.”

When The Beatles released the self titled album, which became known as the White Album, that had songs like “Revolution” and “Helter Skelter”, it was the “sign” for Manson and his ‘family’. The war should start with crimes that make whites really mad and blamed black people.

Back on August 9, 1969, a small group of Charles Manson acquaintances broke in a Roman Polanski rental house on Cielo Drive, 10050, in Bel Air, murdering his pregnant wife Sharon Tate and four friends of the couple.

The victims were shot, stabbed and beaten to death, and their blood was used to write messages on the walls. In one of them was written Pigs. The next night, the same group broke into Rosemary and Leno LaBianca’s house, killing the couple. The messages written on the wall of the house were “Helter Skelter”, “Death to pigs” and “Rise”, references to Beatles Piggies songs, and Helter Skelter. The murders of Sharon Tate, his friends, and the LaBianca couple by members of the “Manson Family” became known as the Tate-LaBianca Affair.