During Kiss Expo 2018 in Atlanta, Georgia, former guitarist Vinnie Vincent made his first public appearance in more than 20 years.

Interviewed at the event, the musician spoke about his departure from Kiss, the legal fights he had with the band and told how his life is currently.

“I spent 20 years in hell,” he confesses, “and it was my hell no one knew about it. I watched the world go round and I heard everything they said about me, what the band was saying about me, and it was a shame. I mean, I think we could have been a great band, we still can be. The magic never ended. I still love them. ” 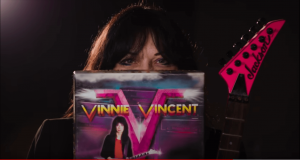 Vincent also said that the suit he filed against the band for royalties from the tracks he composed was a necessary evil. “I tried to solve this, I tried it for four years,” he reveals by saying that when he realized that the band was not interested in reaching a consensus where Vincent could benefit, he needed to open the process.

“I had a family and I did not have the money to look after them or buy a home. I had no future for myself in the band and I needed to take care of my family, “he confesses.

The musician goes on to say that he did what he needed to do to help himself and his family, but the band did not see this and did not accept any solution he presented.

The fight resulted in legal proceedings in which Vincent asked to receive the royalties he deserved from his compositions. The guitarist wrote eight of the ten tracks that comprise the album Lick It Up, the first that the band released without the use of the famous makeup.

See the complete chat below: