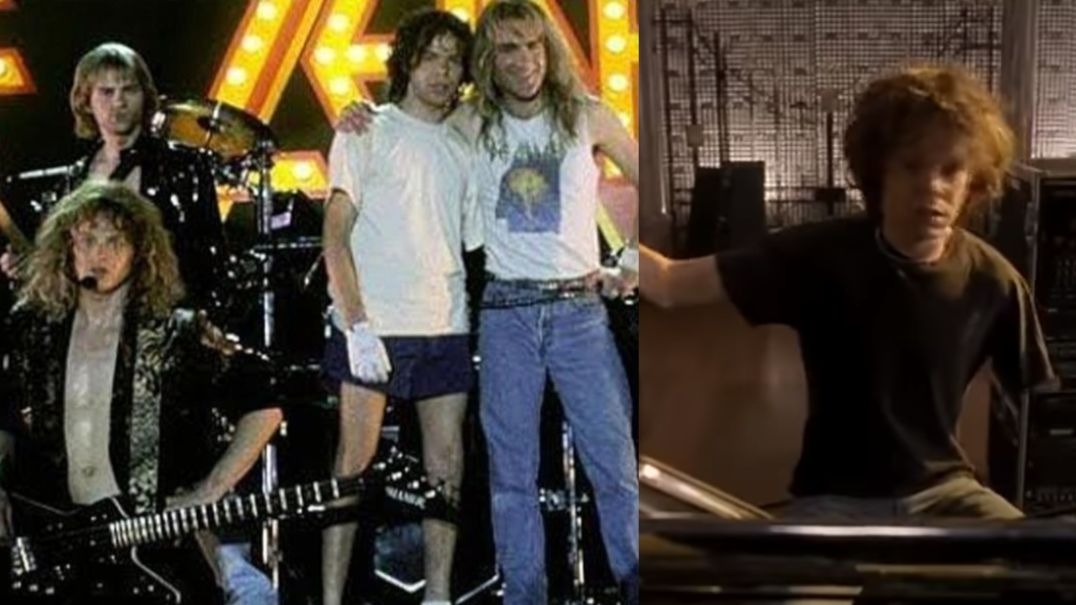 Hysteria – The Def Leppard Story is a 2001 made-for-television movie about the English hard rock/heavy metal band Def Leppard. The film premiered on July 18, 2001 and is available on DVD in the US.

The film revolves around the humble beginnings of the band, their rise to stardom, Pete Willis’ struggle with the bottle and eventual firing, drummer Rick Allen’s car accident, Steve Clark’s battle with alcoholism and the making of their most successful album to date, Hysteria.

But critics and the band didn’t liked the result of the movie, as you can below the player, on the list of Historical inaccuracies.

See the movie below:

The film gives the impression that the car accident occurred while Rick was under the influence. (In reality, Rick and Miriam did not take any drugs before it happened. They were driving on a sunny morning just after breakfast, and Rick was showing his girlfriend Miriam the beautiful nature around Sheffield.)

The band was shown working on the song “Pour Some Sugar on Me” before Robert John “Mutt” Lange’s return as producer (in reality, the song was the last song recorded for Hysteria within two weeks)

Rick Allen auditioning for the band and playing on their Getcha Rocks Off EP. (He didn’t join the band until after the record was recorded with Frank Noon playing drums.)

Phil Collen being discovered by the band at a show his band was playing. (He was friends with the members of Def Leppard when he was asked to join.)

Pete Willis being fired for drinking during a show. (Although he was fired for alcoholism, it was during the recording sessions for Pyromania.)

When the doctor compared John Bonham’s blood alcohol level when he died (.41) to Steve Clark’s (.54), it was in the hospital while recording Hysteria. (In reality, it was during the recording sessions for Adrenalize.)

Robert John “Mutt” Lange speaks with an American accent in the film. (In reality, Lange was raised in South Africa and has a corresponding accent.)

The film shows that Joe Elliott approached Peter Mensch after a Def Leppard performance. (In reality, it was Rick Allen who approached Mensch.)