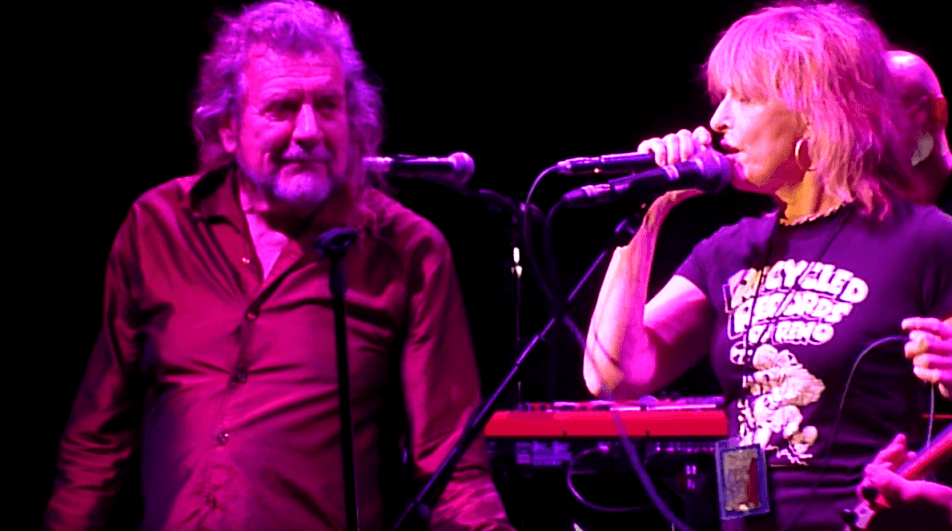 Chrissie Hynde was a surprise guest during Robert Plant and the Sensational Space Shifters’ concert Friday at London’s Royal Albert Hall. They performed “Bluebirds Over the Mountain” and the Pretenders’ “2000 Miles”.

She recorded with Plant “Bluebirds Over the Mountain” that is on “Carry Fire” the eleventh solo studio album by Robert Plant, released on 13 October 2017 on Nonesuch/Warner Bros. Records. It is the second studio album on which Plant is backed by the Sensational Space Shifters.

The show marked the first time the Rock Hall inductees had played the track live together.

“On a wing and a prayer, we have a beautiful song for you that only Chrissie can sing right,” Plant told the audience prior to the Learning to Crawl cut “2000 Miles,” with Plant and the Sensational Shape Shifters providing backup as Hynde took lead.

Plant is regarded as one of the greatest singers in the history of rock and roll; he has influenced fellow rock singer-songwriters such as Freddie Mercury, Axl Rose and Chris Cornell. In 2006, Heavy Metal magazine Hit Parader named Plant the “Greatest Metal Vocalist of All Time”.

In 2009, Plant was voted “the greatest voice in rock” in a poll conducted by Planet Rock. In 2008, Rolling Stone editors ranked him number 15 on their list of the 100 best singers of all time. In 2011, Rolling Stone readers ranked Plant the greatest of all lead singers.