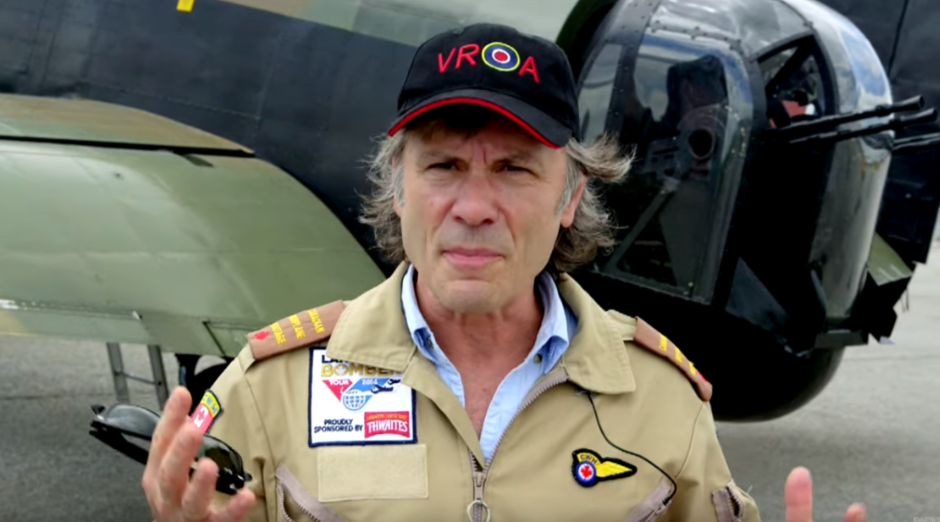 The following video, posted on the official Iron Maiden channel on youtube, shows to the sound of “Aces High” Bruce Dickinson flying the Avro Lancaster, a WWII aircraft.

In the video, Bruce says:

“Let’s fly this magnificent Avro Lancaster, which is one of only two still flying in the world. This is by far the easiest to access. This particular museum is extraordinary – it shows such a passion. the aircraft it maintains, all very historic and very relevant to Canada and the Commonwealth. It’s like a metal symphony that then becomes a frightening roar.”

Dickinson learned to fly recreationally in Florida in the 1990 and now holds an airline transport pilot’s licence. He regularly flew Boeing 757s in his role as captain for the now-defunct UK charter airline Astraeus, which, from 16 September 2010, employed him as Marketing Director.

One of his key roles in that position was to promote Astraeus’ services by increasing their number of videos, leading to the UK Civil Aviation Authority releasing a video featuring Dickinson on aircraft loading safety in June 2011.

Following Astraeus’ closure on 21 November 2011, Dickinson branched into entrepreneurship when he launched Cardiff Aviation Ltd on 1 May 2012, an aircraft maintenance business based at the Twin Peaks Hangar in St Athan, Vale of Glamorgan, Wales. According to The Wall Street Journal, in January 2013 Cardiff Aviation had created 40 jobs and hoped to have over a hundred personnel by the summer of 2013.

In June 2013, The Daily Telegraph reported that the business had expanded to between 60 and 70 employees and are in discussions to set up their own airline. In August 2015, Cardiff Aviation signed a deal to provide airline support to Air Djibouti, for whom Dickinson piloted their maiden flight the following year, a Boeing 737 from Cardiff to Djibouti.

As a result of his ventures in business, he has delivered keynote speeches at events around the globe, including Queen Mary University of London’s Innovation Showcase in November 2012, Connect2Business, Stockholm in March 2013, Aviation Week’s MRO Europe Conference, London in October 2015 and “Blog Now, Live Forever”, Mumbai in October 2015.