In 1989 during Operation Just Cause, the US military surrounded the Apostolic Nunciature in Panama while trying to capture Manuel Noriega, the strongman of Panama. US forces blasted loud rock music—including “I Fought the Law” by the Clash—to put pressure on Noriega to give himself up.

Manuel Antonio Noriega Moreno was a Panamanian politician and military officer who was the de facto ruler of Panama from 1983 to 1989. He had longstanding ties to United States intelligence agencies: however, he was removed from power by the U.S. invasion of Panama.

Born in Panama City to a poor mestizo family, Noriega studied at the Chorrillos Military School in Lima and at the School of the Americas. He became an officer in the Panamanian army, and rose through the ranks in alliance with Omar Torrijos.

In 1968, Torrijos overthrew President Arnulfo Arias in a coup, establishing himself as leader; under Torrijos’ government, Noriega became chief of military intelligence. After Torrijos’ death in 1981, Noriega consolidated his power to become Panama’s de facto ruler in 1983. From the 1950s until shortly before the U.S. invasion, Noriega worked with U.S. intelligence agencies. 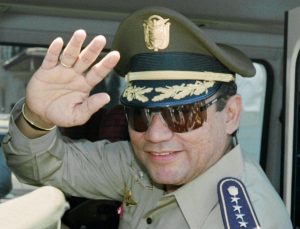 Noriega was one of the Central Intelligence Agency’s most valued intelligence sources, as well as one of the primary conduits for illicit weapons, military equipment and cash destined for U.S.-backed counter-insurgency forces throughout Latin America.

The U.S. also regarded Noriega as an ally in its War on Drugs, despite Noriega himself having amassed a personal fortune through drug trafficking operations. Though his U.S. intelligence handlers were aware of this, it was allowed because of his usefulness to the U.S.