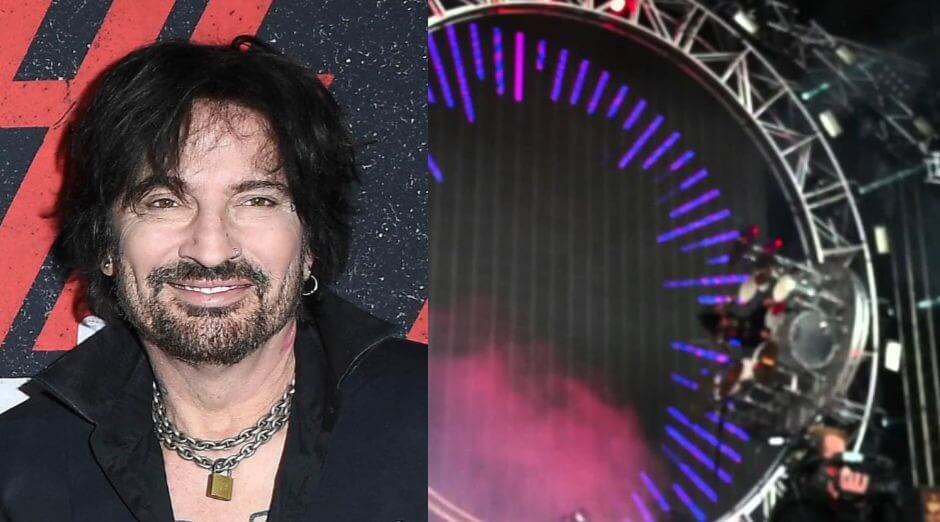 Mötley Crüe‘s drummer Tommy Lee revealed why he created in the band’s shows the “rollercoaster” drum solo in an interview with Modern Drummer. The musician recently released his rap solo album called Andro.

“I created this Frankenstein, this crazy monster… But I guess it all started – the reason why I started doing this was because I remember going to see… I want to say it was Pat Travers or something, and [current Whitesnake drummer] Tommy Aldridge was playing [Aldridge was a member of the Pat Travers Band in the late ’70s and early ’80s], and he was doing a drum solo.

“And I’m like, ‘Dude, this guy is just ripping right now!’ And I’m watching people go buy a t-shirt, go get a beer or go to the bathroom. I was like, ‘Where are you guys going? What are you doing? He’s ripping!’

“And it dawned on me. One of the reasons was that people couldn’t see what he was doing. There’s a camera here behind the drums, you can see what your feet and your hands and everything’s doing.

“What inspired me was the very first… I was like, I need to change the perspective on how the audience sees the drummer. So the very first drum thing, the drum riser that I built was the one that went up, vertically. Which gave the audience basically a bird’s eye view down.

“It’s all Tommy Aldridge’s fault. I believe the spinning cage came where it rotated forward and reverse, sideways. And out over the audience, and once you start doing that kind of stuff. Now it’s on. It’s like, ‘OK, I want to fly from one kit to another.’ That was on the ‘Carnival of Sins’ tour. I wanted, again, I always think about the fans, what would they want to see.

“And so, that’s sort of been my thing, like, how do I involve the audience instead of the drummer just sitting there doing a drum solo – which is cool too, I’m not discounting that by any means, that’s totally cool.

“But I just wanted to take it to another level; and then once you get onto that level, it was like, ‘OK, let’s do an indoor roller coaster.’ The 360 was next.””

The roller coaster – how does the preparation go and how does it change as the performance gets more and more elaborate in the air, and scarier?

“I wish I could say there was, and unfortunately, with productions that big, I don’t think I’ve ever had a time where I’ve had time to like practice and prepare and work with it. It’s always been maybe an hour or two before the doors are opening at the first show where I’m getting a chance to see what this thing can do, what I can do, my limitations, what I can and can’t do.

“I’ve never sat with a drum setup and had a week to mess with it, and so it just sort of progressively gets better because I start to figure out what the fuck’s going on, what I can do and what I can’t do. But I’ve never had a chance to prepare other than just, I guess just personally just being in shape to play and playing a lot. There’s really no preparation for that, I guess you could, I don’t know, go to NASA. [Laughs]”