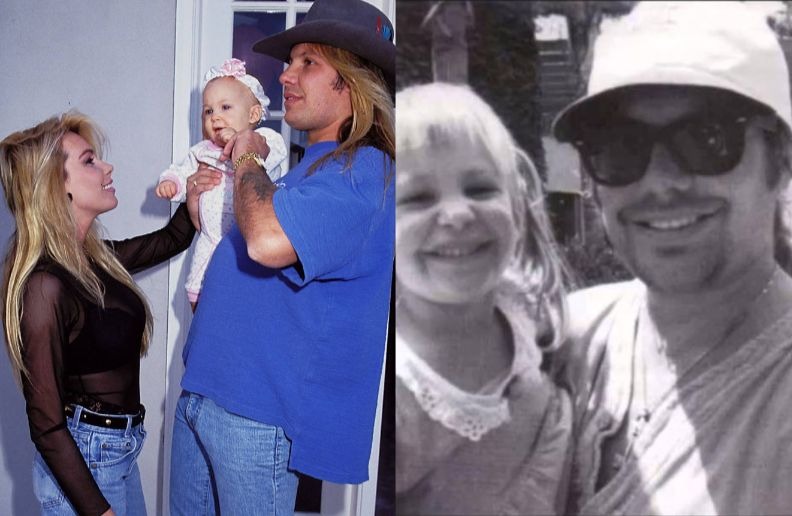 Tragically back in 1995, Vince Neil’s daughter Skylar died of cancer after months of pain at the age of four. After the sad moment, the musician got into a self-destructive phase worse than the past years of his life.

He was also in the middle of a battle with Mötley Crüe and later divorced Skylar’s mother. Angry and suicidal, Neil was using a lot of alcohol and drugs.  The singer talked about the tragedy in the band’s book “The Dirt” in 2001. (Via Ultimate Classic Rock)

The doctors thought she was suffering a burst appendix:

“Instead, they saw that a cancerous tumor around her abdomen had exploded, spreading cancer all through her body,” Neil recalled, adding that he’d been frightened when he saw her “attached to all those tubes and machines” when she’d “been running circles around my legs trying to make me dizzy” the previous weekend.

After months of torment the doctors came to the conclusion that the cancer was worse than anticipated and too dangerous to be fully removed. Parts of most of Skylar’s vital organs were removed in a bid to contain the disease until finally the tumor itself was in a condition to be removed. Neil asked to look at it. “[It] weighed six and a half pounds,” he remembered. “That’s how much Skylar had weighed when she was born. … I had never seen anything like it before: it was the face of evil. It lay spread out in a metal pan, a nacreous mess of shit.”

While attempts to cure her continued, Neil and Sharise found a middle ground as they took turns spending time with their daughter. Even Neil’s new girlfriend Heidi was part of the efforts to keep Skylar’s spirits up. Heidi helped arrange visits from actors dressed as Disney characters, while Neil organized screenings of pre-release kids’ movies. When he realized the ward had only one TV, he bought more sets, along with DVD players, for the other young patients.

“It doesn’t seem like much, but little things can make a whole lot of difference when you’re a kid in the hospital,” he said in his 2010 memoir Tattoos & Tequila.

However, he wasn’t able to cope with the personal anguish. “I would stay at the children’s hospital as long as they’d let me, then I’d drive straight to Moonshadows in Malibu and get liquored up with the regulars until I couldn’t remember my own name,” he said in 2001. “I knew it was wrong to be drinking at this time, but it was the only way I could keep from going completely crazy.”

He recalled returning to the hospital with a giant stuffed panda, only to be met with the news that Skylar’s left kidney had become infected. “That’s all she’s got left,” he told the doctor. “What does this mean?” It meant another surgery – her sixth – leading Neil to ask, “How much more can she take?” The answer was not much. After that operation Skylar fell into a coma.

“Her little body just couldn’t take any more,” he said. “When your body starts to fall apart, there’s no one who can fix the machine. They can only keep it running for a little while longer. And sometimes I wonder whether I did the right thing by keeping Skylar running for so long, keeping her in such pain for five months – one-tenth of her entire life.”

He knew the inevitable end was approaching, and that only made his drinking worse. “I cut the most pathetic figure: a father who just couldn’t deal with the pain of knowing that soon he would have to undergo the worst tragedy that a parent can bear – having to bury his own daughter,” he recalled. “I would have been willing to lay down my own life if it would have helped. I had never thought anything like that before – not about my wives, not about my parents, not about anybody. Perhaps that was why I was trying to kill myself with drink, so that somehow I could martyr myself and exchange my suffering for hers.”

When Sharise called to tell Neil to get back to the hospital as soon as he could, he arrived soon after Skylar had died in her sleep on Aug. 15, 1995. “Her eyes had opened with a momentary flesh of fear and met her mother’s in search of an answer,” he recalled. “‘Don’t be scared, sweetie,’ Sharise had reassured her, squeezing her hand. ‘Go to sleep now. It’s all right.’ And so Skylar slept. In the meantime, I sat in traffic on the Pacific Coast Highway and, for an instant, my heart jumped in my chest. … Afterward, I realized that when the woman that I loved most in the world left, my heart knew it, and for a moment, wanted to catch up with her and join her.”