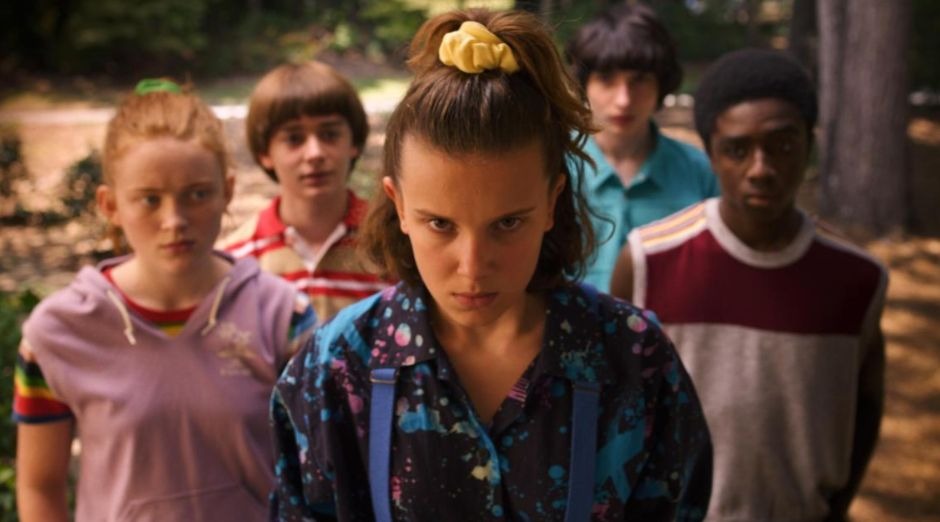 Stranger Things is back with Season 3 and of course, there a lot of rock songs on the soundtrack. So, find out below which are the songs on this new season that plays while Dustin, Eleven, Will, Mike and Lucas are fighting the monsters.

The kids in the summer of 1985 in Hawkins, the new Starcourt mall has become the focal point of the town, driving other stores out of business. Sheriff Hopper is conflicted over Eleven and Mike’s budding relationship, while Joyce considers moving out of Hawkins for better prospects, leaving the state of the children’s friendships and her own relationship with Hopper in the air.

However, strange power fluctuations trigger Will’s awareness of something otherworldly, and Eleven and Max sense something is off about the town’s residents, and despite having closed the portal to the Upside Down, fears that they are all in danger from it still.

“Baba O’Riley”, a song by the British rock band the Who, is the opening track to the band’s studio album Who’s Next, and was issued in Europe as a single on 23 October 1971, coupled with “My Wife”.

“Cold as Ice” is a 1977 song by English-American rock band Foreigner from their eponymous debut album. It became one of the best known songs of the band in the US, peaking at #6 on the Billboard Hot 100. It was initially the B-side of some versions of the “Feels Like the First Time” 45 rpm single.

“Cold as Ice” was used as the soundtrack for a skit on the March 25, 1978 broadcast of Saturday Night Live that showed a man being attacked by a woman in a number of grisly ways. Host Christopher Lee introduced the segment as being “not for the squeamish”.

“R.O.C.K. in the U.S.A.”, subtitled “A Salute to 60’s Rock”, is a rock song written and performed by John Mellencamp. It was the third single from his 1985 album Scarecrow and a top-ten hit on both the Billboard Hot 100 and Top Rock Tracks charts.

According to Mellencamp biography Born in a Small Town, Mellencamp was initially reluctant to include “R.O.C.K. in the U.S.A.” on Scarecrow, feeling the song was too light-hearted to include alongside the otherwise grim songs such as “Rain on the Scarecrow” and “Face of the Nation”

“Can’t Fight This Feeling” is a power ballad performed by the American rock band REO Speedwagon. The single remained at the top of the Billboard Hot 100 chart for three consecutive weeks from March 9 to March 23, 1985.

The song first appeared on REO Speedwagon’s 1984 album Wheels Are Turnin’. It was the group’s second number-one hit on the U.S. charts (the first being 1981’s “Keep on Loving You”, also written by Kevin Cronin) and reached number sixteen in the UK. “Can’t Fight This Feeling” has appeared on dozens of ‘various artists’ compilation albums, as well as several REO Speedwagon greatest hits albums.

Wham! – Wake Me Up Before You Go Go

“Wake Me Up Before You Go-Go” is a song by the British duo Wham!, first released as a single in the UK on 14 May 1984. It became their first UK and US number one hit. It was written and produced by George Michael.

The single was certified Platinum in the US, which at the time commemorated sales of over two million copies. The music video features Michael and Ridgely wearing oversized message T-shirts (“CHOOSE LIFE”) created by Katharine Hamnett, starting a craze covered in the 2002 VH1 series I Love the 80s.

The Cars – “Moving In Stereo”

“Moving in Stereo” is a song by the American rock band the Cars. It appeared on their first album, The Cars, released in 1978. It was co-written by Ric Ocasek and the band’s keyboard player Greg Hawkes, and sung by bassist Benjamin Orr.

“Never Surrender” is a song by Canadian singer Corey Hart. It was released in June 1985 as the first single from his second album, Boy in the Box. The song was number-one for four weeks in Canada and was Hart’s highest charting single in the United States, reaching number three on the Billboard Hot 100 (topping the sales only chart for one week) in August 1985.

Huey Lewis and The News – “Workin’ For a Livin”

“Workin’ for a Livin'” is a single by American rock band Huey Lewis and the News, released in 1982. Included on their 1982 album Picture This, the song peaked at number 20 on the Billboard Mainstream Rock Tracks charts, and number 41 on the Billboard Hot 100. A live version appears as a B-side to the single “The Heart of Rock & Roll”.

According to Huey Lewis, the song was a semi-autobiographical one about past jobs he had before he became a musician. Lewis had wrote it during his time as a truck driver. “I wrote it when I was actually working,” Lewis said. “I thought about all of the jobs which just sort of popped out.” Some of the jobs listed in the song (busboy and bartender) were also jobs Lewis had before becoming a musician.