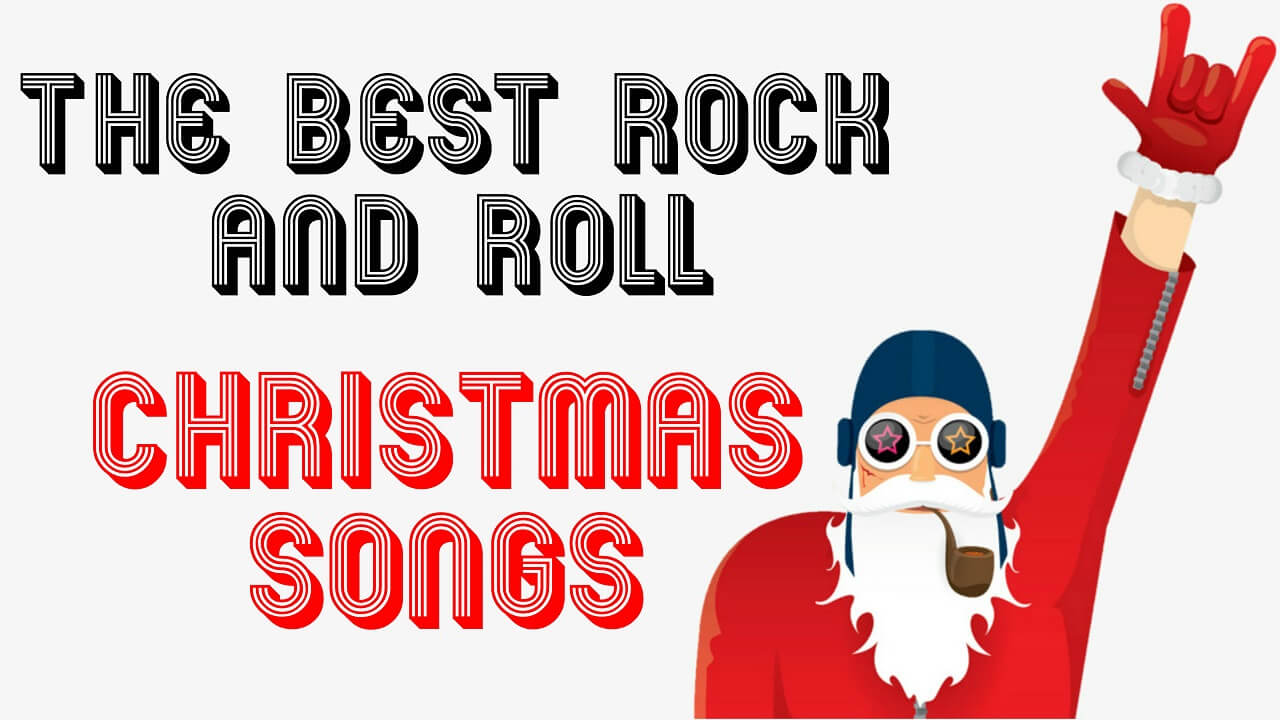 Oh, the Christmas season! Santa Claus all over the place, the snow is falling in some countries and the families are together. Since this is really one of the most magical times of the year and all we need to do is celebrate life and of course, rock and roll!

So, we’ve prepared a good list of the best rock and roll christmas songs for you to play on this Christmas.

As a big Slade fan, this is personally my all time favorite christmas song. It just isnt christmas time for me if i dont hear Noddy Holder pounding vocals screaming “It’s Christmasssss”. The song was released as a non-album single in 1973 and was written by the vocalist Noddy Holder and bassist Jim Lea. It was the band’s sixth and final number-one single in the UK.

Earning the UK Christmas Number One slot in December 1973, the song beat another Christmas-themed song, Wizzard’s “I Wish It Could Be Christmas Everyday”, which reached fourth place. It remained in the charts for nine weeks until February 1974! Can you believe that?

Of course, it was and remains as Slade’s best-selling single, released at the peak of their popularity, and sold over a million copies upon its first release. It is Slade’s last number-one single, and by far their most successful. It has been released during every decade since 1973, and has been covered by numerous artists.

“Blue Christmas” was  written by Billy Hayes and Jay W. Johnson and most famously performed by Elvis Presley. It is a tale of unrequited love during the holidays and is a longstanding staple of Christmas music, especially in the country genre.

The song was first recorded by Doye O’Dell in 1948, and was popularized the following year in three separate recordings: one by country artist Ernest Tubb, one by musical conductor and arranger Hugo Winterhalter and his orchestra and chorus, and one by bandleader Russ Morgan and his orchestra (the latter featuring lead vocals by Morgan and backing vocals by singers credited as the Morganaires).

“Step Into Christmas” by Elton John

Written by Elton John and Bernie Taupin, “Step Into Christmas” was released as a stand-alone single in November 1973. With the song “Ho, Ho, Ho (Who’d Be a Turkey at Christmas)” as the B-side. Upon its original 1973 release, the song peaked at No. 24 on the UK Singles Chart, and it reached a new peak of No. 19 on the same chart in 2017. In the United States, the single reached No. 56 on the Cash Box Top 100 Singles chart and No. 1 on the Billboard Christmas Singles chart.

It was mixed to sound like one of producer Phil Spector’s 1960s recordings, using plenty of compression and imitating his trademark “wall of sound” technique. This was intentional according to both John and Taupin, and an homage of sorts to Christmas songs by Spector-produced groups such as The Ronettes.

In the music video was produced to promote the single, and is notable for its cameo appearance of Bernie Taupin who is seen briefly playing bells during the song’s bridge. Elton is also seen holding his Watford football club supporters card. Elton would later go on to own the club.

“Sleigh Ride” by The Ronettes

A Christmas Gift for You from Phil Spector (1963)

“Sleigh Ride” is a popular light orchestra standard composed by Leroy Anderson. The composer had the original idea for the piece during a heat wave in July 1946 and finished the work in February 1948. It was originally instrumental; the lyrics, where someone asks another to join them for a ride in a sleigh, were written by Mitchell Parish in 1950.

“Sleigh Ride” is in rondo form and the second section utilizes an unusual, unprepared modulation to III, then II. The difficulty of singing this has caused several recordings to alter the harmonies or omit this section altogether, as in the Phil Spector / Ronettes version.

All three Ronettes, along with every other artist who was signed with Phil Spector in 1963, were featured on the Christmas LP A Christmas Gift for You from Phil Spector. For this album, the Ronettes recorded three songs: “I Saw Mommy Kissing Santa Claus”, “Frosty the Snowman”, and “Sleigh Ride”. Therefore all artists sang on the album’s finale, “Silent Night”, which opened with a spoken message from Phil Spector, wishing a Merry Christmas and thanking everyone for supporting the cooperative artists.

One of the most  popular Christmas songs of all time, “Jingle Bell Rock” was performed by Bobby Helms in 1957. And it has received frequent airplay in the United States during every Christmas season since then.

It was composed by Joseph Carleton Beal (1900–1967) and James Ross Boothe (1917–1976). Beal was a Massachusetts-born public relations professional and longtime resident of South Ocean Avenue in Atlantic City, New Jersey. And Boothe was an American writer in the advertising business.

The song’s title and some of its lyrics are an extension of the old Christmas standard, “Jingle Bells”. It makes brief references to other popular songs of the 1950s, such as “Rock Around the Clock”, and mentions going to a “Jingle hop”. An electric guitar played by Hank Garland can be heard playing the first notes of the chorus of “Jingle Bells”. Backup singers were the Anita Kerr Quartet.

“Christmas All Over Again” by Tom Petty & The Heartbreakers

This song was in Playback, a box set compilation by Tom Petty and the Heartbreakers, released in 1995. It contains popular album tracks, B-sides, previously unreleased outtakes, and early songs by Petty’s previous band Mudcrutch.

“Wonderful Christmastime” was released in 1979 by Paul McCartney. It enjoys significant Christmas time popularity around the world. The song was later added as a bonus track on the 1993 CD reissue of Wings’ Back to the Egg album. It is one of the strangest Christmas songs.

McCartney recorded the song entirely on his own during the sessions for his solo project McCartney II. Although the members of Wings are not on the recording, they do appear in the promotional music video, which was filmed at the Fountain Inn in Ashurst, West Sussex.

It also includes footage filmed at the Hippodrome Theatre in Eastbourne, where McCartney rehearsed his 1979 UK tour.

“Father Christmas” by The Kinks

Released in 1977 as single by The Kinks and it talks about a department store Father Christmas who is beaten up by a gang of poor kids who tell him to give them money instead of toys, as toys are impractical; and asks that the toys be given “to the little rich boys.”

At one point, a child asks the narrator to give his/her father a job for Christmas—or, if he must deliver a toy, a machine gun.The song has been covered a number of times by bands including the Gigolo Aunts, Dispatch, Green Day, Man Overboard, Bad Religion, Warrant, Lit, Bowling For Soup, Save Ferris, Smash Mouth, Cary Brothers, Action Action, Everything, Deer Tick, OK Go, Cheap Trick, and the Clay Pigeons. It is one of the heaviest Christmas songs.

“Little Saint Nick” is a holiday-themed hot rod song about Santa Claus and his sleigh. Written by Brian Wilson and Mike Love. The track was first released as a single on December 9, 1963, and peaked at number 3 on Billboard magazine’s special seasonal weekly Christmas Singles chart.

The idea for the song was partly inspired by record producer Phil Spector’s plans to record a Christmas album. Wilson recalled: “I wrote the lyrics to it while I was out on a date and then I rushed home to finish the music.”

Some of its rhythm and structure derives from the group’s “Little Deuce Coupe”. Also co-written by Wilson and released as a single six months earlier. Love was not originally listed as the co-writer of “Little Saint Nick”. His credit was awarded after a 1990s lawsuit.

“In Dulci Jubilo” by Mike Oldfield

Released in 1975 as Mike Oldfield single the prominently festive song features an instrumental version of a Christmas carol, “In dulci jubilo”, as well as the finale-song from Oldfield’s Ommadawn album, “On Horseback”.

The track is an instrumental version of the German traditional Christmas carol of the same name. Known best in England as “Good Christian Men Rejoice”. Mike Oldfield had recorded another version of this song as the B-side to his previous single, “Don Alfonso”, which did not chart, playing all instruments himself.

Later, he felt a better version could be done, and re-recorded it in October 1975 at the Manor. But incorporating some of the previous version’s backing tracks recorded November 1974 at the Beacon, his home studio.

“Happy Xmas (War Is Over)” by John Lennon

This smash Christmas hit was released in 1971 as a single by John & Yoko/Plastic Ono Band with the Harlem Community Choir. The lyrics were written by the couple. And was the seventh single release by Lennon outside his work with the Beatles.

The track reached number 4 in the UK, where its release was delayed until November 1972. It has periodically reemerged on the UK Singles Chart. Most notably after Lennon’s death in December 1980, when it peaked at number 2.

And was also a protest song against the Vietnam War, “Happy Xmas (War Is Over)” has since become a Christmas standard. Frequently covered by other artists, appearing on compilation albums of seasonal music, and named in polls as a holiday favorite.

The kings of Punk Rock had also released a Christmas song back in 1989 in “Brain Dain”.

About the making of the album, Dee Dee wrote in his autobiography, Lobotomy: Surviving the Ramones:

“It was tough recording the Brain Drain album because everyone took their shit out on me. I dreaded being around them. It drove me away — I didn’t even end up playing on the album. Everybody in the band had problems; girlfriend problems, money problems, mental problems.”

The Beatles releases restored videos from “Something”, “Yesterday” and more
David Coverdale reveals that “Fool For Your Loving” was made for B.B King
Advertisement
To Top