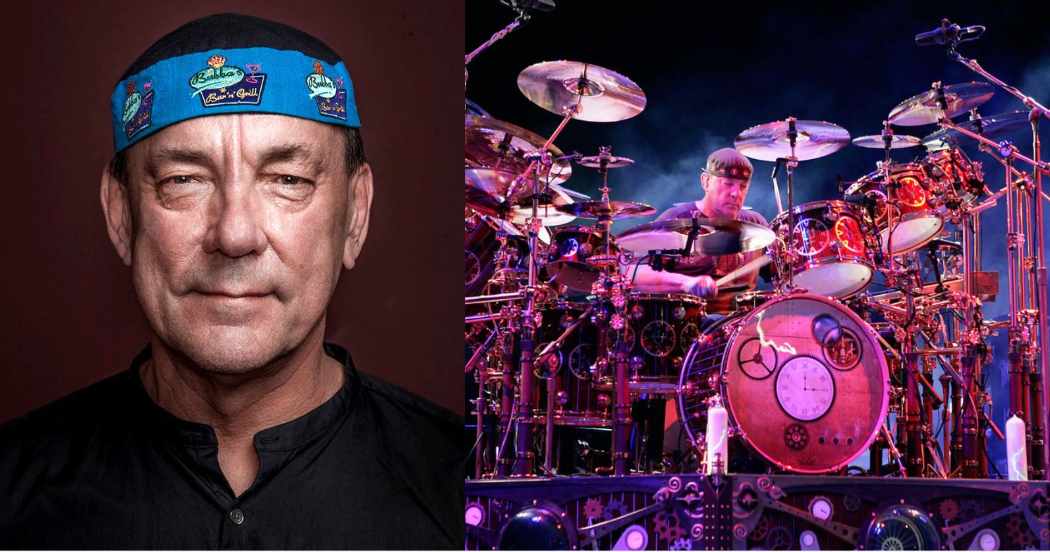 The late Neil Peart, main lyricist and praised drummer of the legendary Canadian band Rush is often considered one of the best of all time at the instrument. He inspired countless generations of drummers from many different genres and helped to create some of the best-selling albums the group had like “2112” (1976), “Permanent Waves” (1980) and “Moving Pictures” (1981).

To form his unique style that is considered by almost all drummers impossible to be reproduced, Peart was heavily influenced by 10 drummers that were listed on Rush’s official website. Rock and Roll Garage gathered what Peart said over the decades about these musicians that were so important to him as a drummer.

The 10 drummers that Rush’s Neil Peart listed as influences

The oldest drummer on the list Gene Krupa was crucial for Neil Peart because the Canadian musician decided he wanted to be a drummer after he watched the classic 1959 movie “The Gene Krupa Story,” which told the story of the influential American drummer.

In an interview wtih NPR back in 2015, Peart recalled the importance of the musician, saying: “He was the first rock drummer, in very many ways. Without Gene Krupa, there wouldn’t have been a Keith Moon. He was the first drummer to command the spotlight. The first drummer to be celebrated for his solos, because they were very flamboyant. He did fundamentally easy things, but always made them look spectacular.”

Krupa died in 1973 at the age of 64, one year before Neil Peart joined Rush. One of the most influential drummers of all time, he was known for his energetic style and showmanship. He is considered the founding father of the modern drumset.

Another drummer that showed a lot of energy on his style, The Who’s Keith Moon was also a big influence on Peart as he recalled in an interview with Rhythm magazine back in 1987:  “I think (Gene Krupa’s) rock ‘n’ roll heir was probably Keith Moon. In fact, I see a lot of direct similarities between their playing styles. Even though Keith Moon showed even more abandon and was more sloppy. But he was a drummer who really captured my imagination because he was so free and so exciting because of his freedom. It opened me up”.

The Canadian musician had the chance at the age 0f 17 to watch Moon playing live with The Who at the Old Coliseum in Toronto when they were supporting the album “Tommy”. In a conversation with Modern Drummer magazine back in 1980, Peart once again praised Moon saying he was one of his favorite mentors and that he gave him “a new idea of the freedom and that there was no need to be a fundamentalist. I really liked his approach to putting crash cymbals in the middle of a roll. Then I got into a more disciplined style later on as I gained a little more understanding on the technical side.”

Famous for his work with Jimi Hendrix, Mitch Mitchell helped the sound of the late legendary guitarist sound even bigger with his style. Peart heard Mitchell for the first time when his drum teacher played him the Jimi Hendrix record “Are You Experienced?” at the Peninsula Conservatory of music in St. Catharines, Ontario and told him that that record changed everything in music.

Mitchell was inducted into the Rock and Roll Hall Of Fame back in 1992 as a member of the Jimi Hendrix Experience.

One of the most influential drummers in history, the late Cream member Ginger Baker is considered to be the first musician that made a drum solo in a Rock and Roll record and it was a big influence to Neil Peart.

In an interview for “Beware Of Mr. Baker“, documentary about the life and career of the legendary Cream drummer, Neil Peart praised the musician, saying (Transcribed by Rock and Roll Garage): “Cream absolutely might be called the first Progressive band. They were breaking out of the chains of Pop. Ginger Baker’s most notable achievement that should be recognized is the first Rock drum solo. Me as a 15 year-old kid as the time, I was ‘yeah, yeah. That’s the Rock drummer I wanna be.’

Ginger Baker died back in October, 2019 at the age of 80, just three months before Neil Peart. The Rush drummer posted a message at the time on the group’s social networks, saying: “He was really at the forefront of a complete revolution of Rock. It is hard to find fault with the notion he was the pioneer of a Rock drummer. There was no context for him. There was no archetype”.

One of the co-founders of the legendary British Progressive Rock band King Crimson, drummer Michael Giles was also one of Peart’s inspirations, especially on the style, the way he did arrangements and also according to Neil on how to use a lot of fills but in a cool way.

In an interview with drummer Mike Portnoy back in 2007 for Rhythm magazine, Peart talked about his admiration for Michael Giles, saying: “Oh, big time (Inspiration). Not only the early King Crimson but MacDonald and Giles too. It is everything I wanted. It was both disciplined and exciting. He was so fired up by what he was doing. But it was contained within a structure. His fill construction and sense of ensemble playing and orchestrating a part was unparalleled and very underrated.”

The late Led Zeppelin drummer is often listed as the best drummer of all time alongside Neil Peart and the Canadian musician was influenced by the British player. In his 2005 movie “Anatomy of a Drum Solo” (Transcribed by Andew Olson), Peart recalled how Bonham influenced him, saying: “In many ways, my drum solo remains an ever-changing tribute to all the drummers that I have ever appreciated. You don’t have to listen too hard to hear me emulate Gene Krupa’s tom-tom rhythms, Buddy Rich’s driving snare work, Michael Giles’s intricate syncopations, Keith Moon’s explosive fluidity. Or John Bonham‘s “big foot” triplets. They were all so great.”

“When I was starting out, very young, John Bonham and Led Zeppelin were new in those olden days. John Bonham did always the big triplets with his giant bass drum. I had two little bass drums at the time. So I just added those in and had kind of four-beat triplets as my variation on it. So then over the years I found many ways to develop that. Also to apply it to songs outside of the solo.”

The American drummer Michael Shrieve is best known for playing on the first seven Santana albums from 1969 to 1974. He was the second youngest musician to perform at Woodstock.

Back in 2012, Shrieve interviewed Neil Peart backstage at the Seattle Key Arena and about that encounter with the Rush musician, Shrieve said in an interview with Hit Channel in 2015:  “In fact I was very surprised. He (Neil) came in and he told me that he used to play “Soul Sacrifice” in a band he had. Also that he was a big Grateful Dead guy too. So I was very impressed with him”.

“He was very knowledgeable, very open, curious and very intelligent. He has a lust for life that I very much admire. So he was very inspiring to me. We got on very well, although we haven’t been in touch since. I would like to get back in touch with him. I enjoyed it very much”.

Another drummer that achieved fame with a Progressive Rock band, Phil Collins was another big influence to Peart as he revealed in an interview with Rhythm magazine back in 2011: “Phil Collins was an enormous influence on my drumming in the ’70s, and thus remains a part of my playing even today. His recorded drum parts with Genesis and Brand X in those years were technically accomplished. Yet so musical, even lyrical. Also his rhythmic patterns were woven into the intricacy of the music, while lending a smooth, fluid pulse to the songs and extended instrumentals”.

“His fills were imaginative and exciting. Alive with energy and variety. While the refined technique was always in the service of the music. Even within those fills, Phil applied a jazz drummer’s sense of dynamics, which also guided his ensemble playing. It inspired me to try to incorporate that sensibility into my own triple-f approach.”

The Canadian musician told Music Radar in 2015 that in his opinion the famous Genesis album “Selling England By The Pound” (1973) was an enduring masterpiece of drumming.

One of the founding members of YES, the drummer Bill Bruford also worked with King Crimson, Roy Harper and Genesis. In an interview with Modern Drummer magazine back in 1980, Peart praised the British musician, saying: “Bill Bruford is one of my favorite drummers. I admire him for a whole variety of reasons. And I like the stuff he plays, and the way he plays it. I like the music he plays within all the bands he’s been in.”

He was inducted into the Rock and Roll Hall Of Fame as a member of YES back in 2017 by Peart’s bandmates Alex Lifeson and Geddy Lee.

Neil Peart invited the musician to be part of the 1994 Buddy Rich tribute album “Burning For Buddy” that the Rush musician produced and in the press release for the record he praised Cobham, saying: “Bill is a legendary modern jazz player. (He) has influenced a generation of drummers through his work with the Mahavishnu Orchestra, Miles Davis, Quincy Jones, Freddy Hubbard, George Benson, many releases on the CTI label in the ’70s, his own group Dreams, and most recently, Peter Gabriel.”