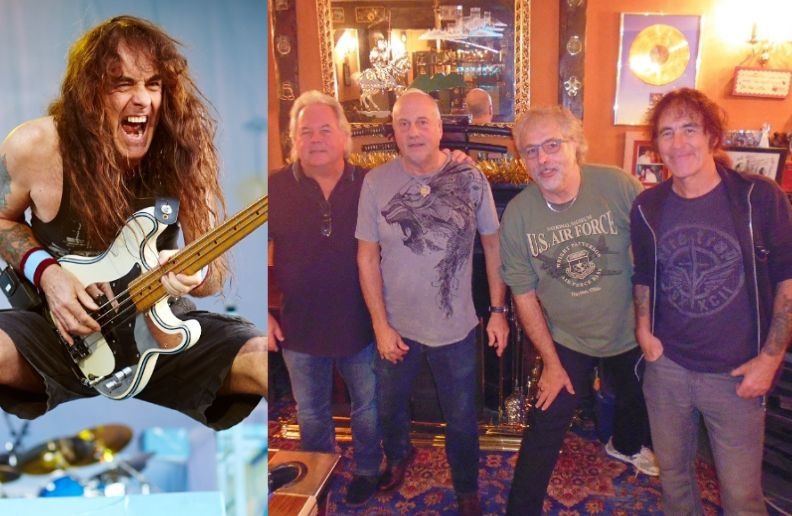 Iron Maiden was formed on Christmas Day 1975, shortly after bassist Steve Harris left his former group, Smiler. After having his compositions rejected by several bands in which he participated, considering them difficult and too complicated, Steve Harris decided to create his own band.

Harris attributed the name Iron Maiden inspired in the film The Man of the Iron Mask (1939) which is based on the work of Alexandre Dumas, in addition to the obvious verbal connection with the instrument of torture of the same name.

The band’s first performance took place at a place called St Nicks Hall in Poplar (East End, London) on May 1, 1976. After that, the band continued to perform at the Cart and Horses Pub in Maryland Point (Stratford, London).

Murray remains in the group to this day. Bob Sawyer joined the band in late 1976 as a second guitarist; but as he had quarrels with Murray, he had Dennis Wilcock oppose Dave, and then Dennis suggested his expulsion. Bob was not left behind and because of his misconceptions on stage (like pretending to play the guitar with his teeth), he went along in July of ’77. Ron Matthews held out a little more.

There was a guitarist from a band called Hooker that Maiden saw playing in the pubs: Terry Wapram. After a hearing, the band invited him in and Wapram performed some shows as the only guitarist.

Shortly thereafter, Ron left (not sure if by influence of Wilcock, as reported in Early Days). Dave Murray joined his friend Adrian Smith in the Urchin band in 1977, while the Iron Maiden had a hard time: Steve and Dennis called Thunderstick (drummer) Tony Moore (keyboard), but after a concert they realized that the keyboard would not be a good substitute for the second guitar.

The band was unhappy and the weather was getting bad until after a few rehearsals, Moore decided to leave. At that point, Harris went to an Urchin rehearsal to call Murray back to the band, which happened successfully.

But Wapram, indignant because he would lose some of the attention, did not accept Murray back and was invited out. With Murray back and only 4 members, the band decides to make a show at Bridgehouse and another at the Green Man pub. The first was a terrible, after the drummer had played wrong several songs and shouted for the audience to shut up.

At that time Wilcock had already spread to some fans who wanted to leave the band, and the show had generated some expectation around that too. That is what happened. In the break between Bridgehouse and the Green Man, Dennis said nothing and didn’t show up at the pub.

Harris went to his house, but the singer refused to sing one last show. Sad, Harris returned to comply with the agreement and Maiden appeared as a trio in April 78, with Harris, Murray and Thunderstick. Steve kicked out the drummer, already counting on Doug Sampson for the post.

With this new trio, the Maiden would spend about 6 months rehearsing before playing live or arranging any other member.