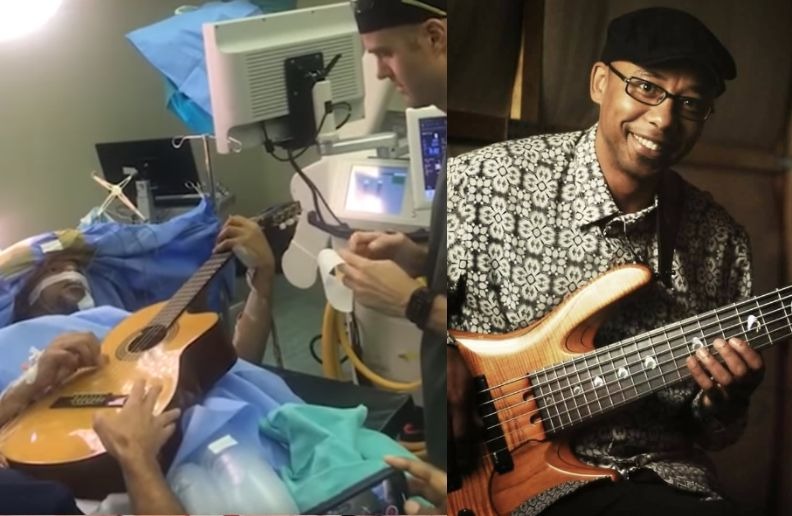 South African jazz musician Musa Manzini underwent brain surgery to remove a tumor. The surgeons asked Manzini to remain awake during the operation and to play the guitar. The music would help with the procedure, known as an agreed craniotomy.

The six-hour operation was the result of a recurrent tumor that threatened paralysis in the part of the brain that controls voluntary movements. It was the method chosen to preserve and restore the movements of the musician’s hands. “That way, we were able to test the regions of the brain before they were removed. This allows removal of the tumor, minimizing the damage, “said surgeon Dr. Enicker.

Musa Manzini was born at Inanda, north of Durban, Kwa-Zulu Natal. In 1986 he then moved to Cape Town for high school and university studies. It was later in his high school days that he first picked up the guitar just as a hobby, but was hooked to it ever since. “I was faced with having to choose between music as a full-time career or becoming a lawyer which is the career my parents had carved for me. At one point, I thought I could be a lawyer who plays the bass”.

In 1995, while at UCT, he received the Prof Peter Klatzow Award for composition and orchestration “It was a big challenge coming from the township and being introduced to classical music at tertiary level, having to analyse the music of Bach, Chopin, Mozart, Debussy, Schonberg and other European composers” After graduating with a BMus degree, Musa spent three years as a part-time lecturer at UCT instructing electric and acoustic basses, jazz theory and improvisation to bridging course students, while at the same time performing and recording as a session musician around the country with musicians like Rene’ MacLean, Jimmy Dludlu, Jonathan Butler, Gavin Minter, Nhlanhla Magagula, Kevin Gibson, Mark Goliath, Judith Sephuma, Winston Ngozi, Sipho Mabuse, Menyatso Mathole, Selaelo Selota, Joe McBride, UCT Jazz Orchestra and many other muso’s at that period.

Continue Reading
You may also like...
Related Topics:Featured, Music, news