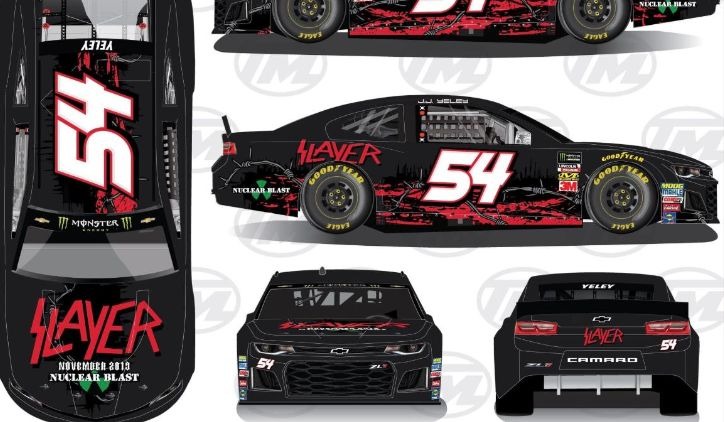 Last month, Megadeth was present at Nascar with Tyler Reddick’s car in their honor. Now it’s time for Slayer to be part of the competition.

The group, which is currently on its farewell tour, unveiled its own Chevrolet Camaro to NASCAR. The car will race with Rick Ware Racing’s team this weekend at the Bristol Motor Speedway in Tennessee.

The National Association for Stock Car Auto Racing (NASCAR) is an American auto racing sanctioning and operating company that is best known for stock-car racing.

See the car below:

Slayer is an American thrash metal band from Huntington Park, California. The band was formed in 1981 by guitarists Kerry King and Jeff Hanneman and vocalist and bassist Tom Araya.

Slayer’s fast and aggressive musical style made them one of the founding “big four” bands of thrash metal, alongside Metallica, Megadeth and Anthrax. Slayer’s current lineup comprises King, Araya, drummer Paul Bostaph and guitarist Gary Holt. Hanneman and drummers Dave Lombardo and Jon Dette are former members of the band.

In the original lineup, King, Hanneman and Araya contributed to the band’s lyrics, and all of the band’s music was written by King and Hanneman.