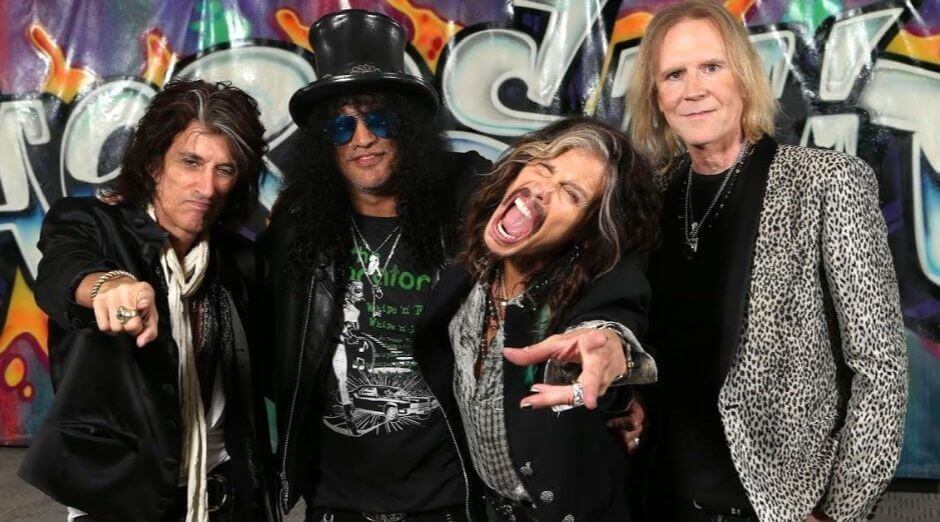 Guns N’ Roses guitarist Slash talked about Aerosmith and the first time he saw them live in an interview with Classic Rock Magazine. The musician revealed their were not his first favorite band since when he was a kid in England he grew up listening to Rolling Stones and The Who.

Guns N’ Roses’ Slash said about the bands he grew up listening and his love for Aerosmith:

“When I was a kid living in England I was raised on The Rolling Stones and The Who – those were my dad’s bands. They were the closest thing I had to anarchy at the time. You know, The Beatles were cute and lovable, but The Who were so loud and brash, in-your-face, fucking slamming power chords!”

How did you discover Aerosmith? “When I moved to the States, aged 13 or 14, I started rediscovering music for myself. I was chasing this girl who was twice my age. When I finally got into her apartment, she played me [1976’s] ‘Rocks’ for the first time.

Is that the record that inspired you to start playing guitar?

“I’m not sure if I started playing because of that record, but it was certainly around that time. Certainly one of the first riffs I wanted to learn was ‘Back in the Saddle.’ I think I was 15. when I started playing guitar, and I first heard ‘Rocks’ a year or so before that.”

What was so exciting about Aerosmith back then?

“For me, it was all about the music, not their image or lifestyle. I really didn’t start to look at bands from an image point of view until later on. I used to meet a lot of rock stars as a kid – because my parents were part of that scene, so it wasn’t a big deal to me. It was only later, when I started seeing rock ‘n’ roll magazines, that I really paid any attention to the image.

“But I knew they looked great. They just looked fucking nasty. Joe Perry was the coolest looking guitar player, Steve Tyler looked completely manic. You know, the Stones were cool, but they were my dad’s band. Aerosmith was my band.” “I remember hearing ‘Walk This Way’ on the radio. I vaguely remember liking that song but I wasn’t aware of who Aerosmith was. Then the ‘Rocks’ album turned me upside down. I got hold of that – this was at a time when I didn’t have any money at all, so to buy a whole record was a big thing. Next, I got ‘Live! Bootleg’ because it had all their big songs. I love that record. That to me is the quintessential live rock ‘n’ roll album of all time. It’s amazing. From there I got every single Aerosmith record,” Slash said.

When did you first see them live?

“In 1978 at the World Music Festival – two days, 15 to 20 bands a day. Ted Nugent and Cheap Trick were headlining the first day, Aerosmith and Van Halen the second day. And Aerosmith was fucking horrible! There was only one song in the set that I actually recognized! It was just a huge barrage of noise. It was disappointing for me – I was expecting them to be more professional.”

They were probably on drugs.

“Oh, I’m sure they were. But back then I had no idea about what the band was about. I didn’t know that, at that point, a good Aerosmith show was a rare occurrence. Van Halen totally blew them away! But I was so innocent. I remember watching Steve Tyler fall over on stage and thinking, ‘Wow, the guy must be really clumsy.’ I had no idea drugs were involved.

“It was only when Joe Perry left the band [in 1979] that I realized. There was a lot of talk at that point about their drug problems. And it really bummed me out. I couldn’t fathom the concept of a band like that breaking up over something so stupid.

“When Keith Moon died, I understood why The Who split up. When John Bonham died, Jimmy Page said, ‘We cannot continue as Led Zep without John.’ That I could understand. But when Aerosmith broke up, it broke my heart.”

“Well, the thing is, I’d come from that kind of background anyway. I was exposed to a lot of drugs and all that malarkey from a young age. So it was really their music and their attitude that appealed to me.

“Later on when I started my own bands they were always whiskey-drinking, pot-smoking, acid-taking kind of bands. All that kind of shit. But I don’t think I fully grasped the problems Aerosmith had until I started doing heroin myself,” Slash said.

They ended up making some pretty awful records, didn’t they?

“No! Just one. They made an album without Joe or Brad [Whitford, guitar], [1982’s] ‘Rock in a Hard Place.’ It had some good songs, but it didn’t sound right. And that was it. After that, they were finished for a long time.”

When GN’R toured with Aerosmith, did you get a chance to express your devotion?

“Not really. It wasn’t like that. Guns was a pretty rowdy bunch of guys, and Aerosmith kept their distance. We didn’t really hang out because they had this no-alcohol, no-chemical rule: if you were near them you weren’t allowed to have any booze on you, you couldn’t be all fucked up. But I did get to know the guys. They became really good friends.”

They had an amazing comeback in the ’90s. Were you still a fan at that point?

“From that point on, nothing they did interested me. I would wait for the record to come out and listen to it, but it never had the edge that ‘Rocks’ did. Not even [1977’s] ‘Draw the Line’ was quite the same”, Slash said.