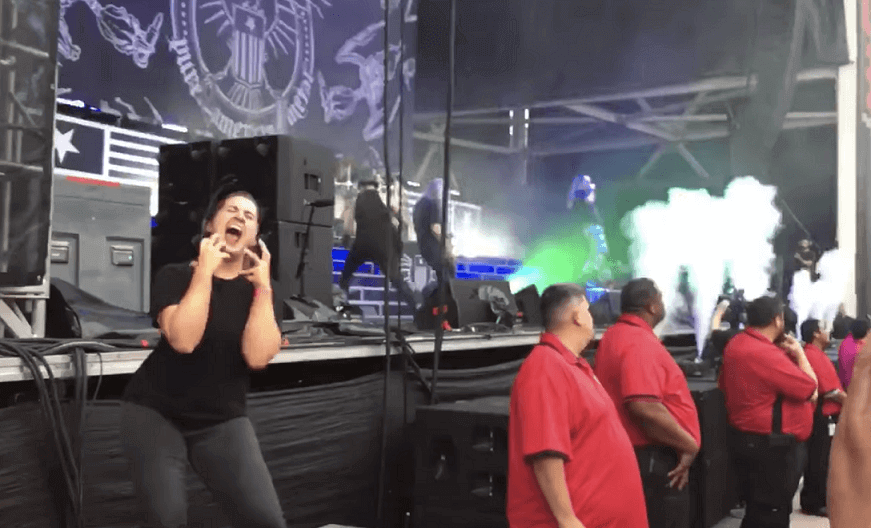 Nowadays it is more common to see in major festival shows sign language interpreters next to the stage, transmitting with body expressions the emotions and lyrics of the songs to hearing disabled fans. But in the last few days a case in the United States caught attention and eventually became viralized.

During a presentation in Austin, Texas, of the heavy metal band Lamb Of God, the performer Lindsay Rothschild-Cross gave a show apart. With grimaces and movements worthy of a frontwoman, she made a catchy interpretation of the song “Ruin”.

In a report on ABC’s Good Morning America program, Rothschild-Cross, a high school teacher, revealed that she loves hard rock and metal. “I grew up listening to Guns N ‘Roses, Alice in Chains, Iron Maiden and stuff like that,” she said.

However, despite appearing quite secure during the performance, Rothschild-Cross was not so confident before the show. “In the beginning, I was sincerely very nervous because I had never played metal,” he admitted, adding, “The key is to play the lead singer.”

In a statement sent to ABC News, Lamb Of God frontman Randy Blythe praised Rothschild-Cross. “I’m always very pleased when I see sign language interpreters at our shows, and the Austin show was no exception,” Blythe said.

He added, “That day there were a lot of interpreters taking turns – everyone was working hard and doing a great job, but Lindsay’s performance of our performance stood out so much that I jumped off the stage and sang alongside her for a while.”