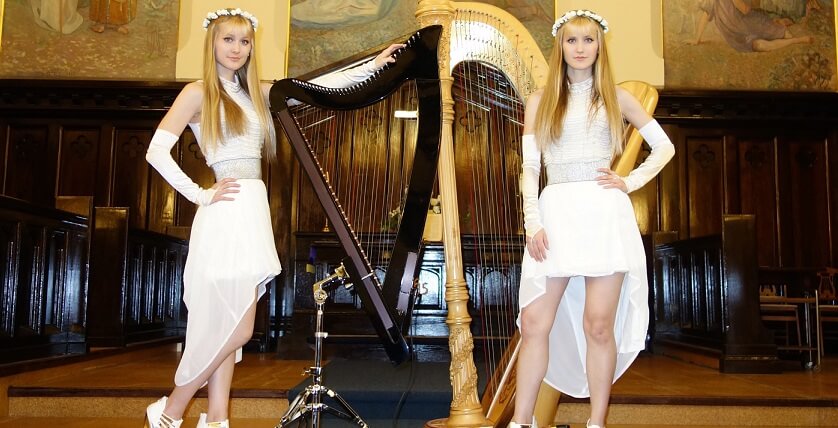 The Harp Twins Camille and Kennerly are talented musicians that besides writing new music, also makes a lot’s of rock and roll covers on the harp. And here it is their version for Billy Idol’s “White Wedding”.

“White Wedding” is a song by Billy Idol that appeared on his album Billy Idol in 1982. It is often considered one of his most recognizable songs, although other Idol songs charted higher. It peaked at No. 108 on the Billboard Bubbling Under the Hot 100 on its original release, and reached No. 36 on the Billboard Hot 100 when it was re-issued in 1983. In the UK it reached No. 6 in the UK Singles Chart upon its re-release there in 1985 and 1988, when it was re-issued to promote the Vital Idol remix album.

The music video, featuring Idol attending a gothic wedding, is one of his best-known. The bride is played by Perri Lister, Idol’s real-life girlfriend at the time. She is also one of the three dancers clad in black leather, who slap their buttocks in time with the clap track in the song as they shimmy downwards near the end. “That’s the kind of thing they love in England”, says Idol.

In one scene from the video, Idol forces the barbed-wire wedding ring onto the bride’s finger and cuts her knuckle. Lister insisted that her knuckle actually be cut in order for the scene to appear more realistic. MTV initially removed this scene from the video. Also controversial were the apparent Nazi salutes made by the crowd toward the couple. Director David Mallet says he was merely “playing with the power of crowd imagery” when he had the extras reach toward the bride and did not realize how it looked until later.

The Thin White Duke: David Bowie’s darkest character
Back In Time: Jimmy Page playing and singing on tv when he was a kid
Advertisement
To Top