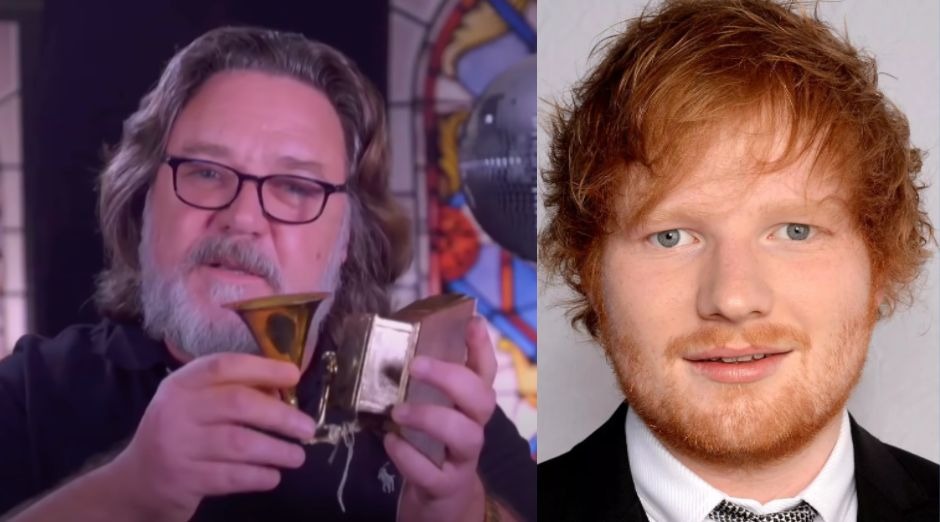 Russell Crowe revealed that him and Ed Sheeran drank whiskey on Johnny Cash‘s Grammy award. The actor told this story in an interview with James Corden and explained he bought Cash’s award during an auction. The country singer won the Grammy for the Class of ’55 album with Carl Perkins, Jerry Lee Lewis and Roy Orbison.

During the show James Corden asked the actor about valuable items that people don’t usually see and he promptly brought the statuette.

“Ed [Sheeran] has been here on the farm a couple of times and one night we’re in the bar and he asked me where is that Grammy of Johnny Cash,” he said. “I went and got it and he said, ‘You know what we do with Grammys?'”

Crowe revealed that moments later he and the singer poured Jack Daniels into Cash’s Grammy and started doing shots. “That may be one of the best showbiz stories I’ve ever heard,” Corden responded to Crowe’s. “Bless you for sharing that.”

Cash was an American singer, songwriter, writer, director and actor, known to his fans as “Man in Black”. He is considered one of the most influential musicians of the 20th century. Also is considered the “king of country music” and an icon of the genre. In a career that spanned almost five decades, he was for many people the personification of country. Due to his sepulchral voice and the distinctive boom chicka boom sound of his backing band “Tennessee Two” are some of his “trademarks”.

Much of Cash’s music contained themes of sorrow, moral tribulation, and redemption. Especially in the later stages of his career. His signature songs include “Folsom Prison Blues” and “I Walk the Line”. In addition to “Ring of Fire”, “Get Rhythm”, and “Man in Black”.