Robert Plant finished the first leg of his North American tour a few days ago and he already announced more dates for him and The Sensational Space Shifters to perform. The 13 dates will be on next june.

Special guests will be on the shows, like Lucinda Williams, Los Lobos, Sheryl Crow, Jon Langford and Seth Lakeman. 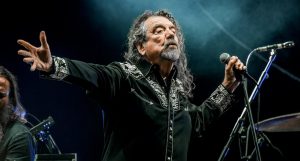 The dates promote his latest album “Carry Fire”, that came out in October.