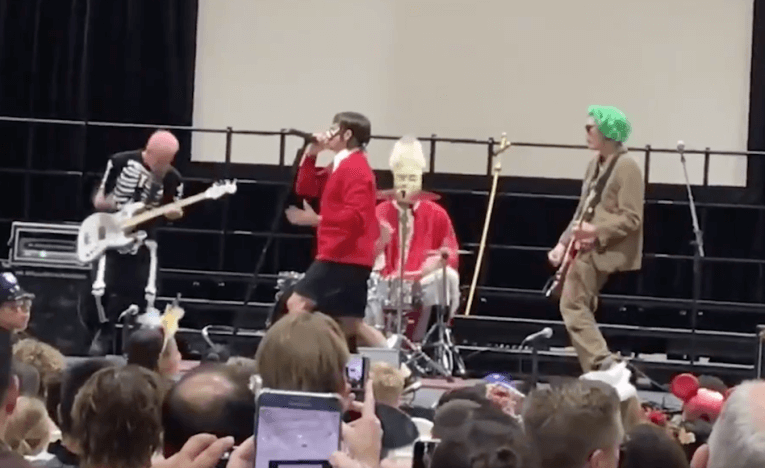 As you well know, the guys at Red Hot Chili Peppers have already been major attractions of big festivals and crowded stadiums around the world. This time, though, the venue was a bit smaller and … different. The band emerged by surprise during the morning break of the school where drummer Chad Smith’s sons study.

In his personal Instagram, the musician posted a video of the moment with the following caption:

And really, in their incredible outfits, the group done good. While the drummer was a mix of Papa with Guy Fawkes, Anthony Kiedis dressed as a student, Flea was like a skeleton and Josh Klinghoffer put on a pair of glasses and a green wig.

Currently, the band consists of founding members vocalist Anthony Kiedis and bassist Flea, longtime drummer Chad Smith, and former touring guitarist Josh Klinghoffer. Red Hot Chili Peppers are one of the best-selling bands of all time with over 80 million records sold worldwide, have been nominated for sixteen Grammy Awards, of which they have won six, and are the most successful band in alternative rock radio history, currently holding the records for most number-one singles (13), most cumulative weeks at number one (85) and most top-ten songs (25) on the Billboard Alternative Songs chart. In 2012, they were inducted into the Rock and Roll Hall of Fame.

See Joey Kramer net worth, lifestyle, family, house and cars
Back In Time: Ozzy Osbourne and Lemmy Kilmister have dinner together
To Top