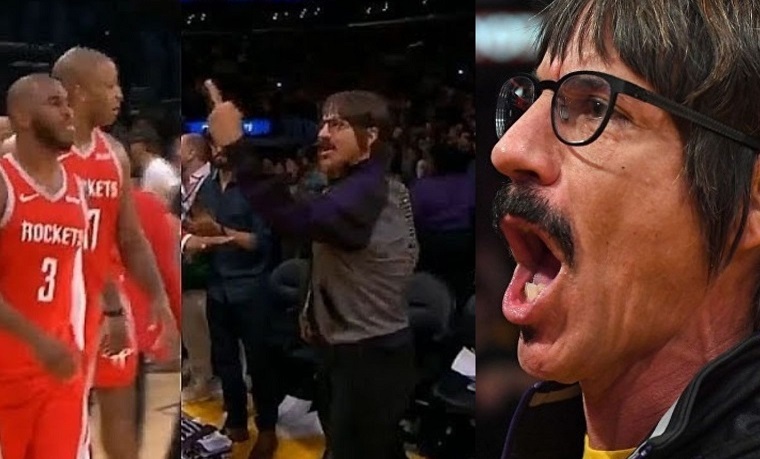 It happened this Sunday, October 21, during a basketball game between the Los Angeles Lakers and the Houston Rockets; Anthony Kiedis, who is a fanatical fan for the first, was excited during a bid where two rival players confronted and ended up being suspended after a session of push-shove with right of raids and even spit!

When Rocket player Chris Paul went through Kiedis, he tried to get the player to take satisfaction but was restrained by a security guard who drove the player off the court. In the end, the Lakers lost by 115 to 124.

Flea was also in the game, and he posted the image above in the instagram with the words: “At the Lakers game with my brother. In the end everything went crazy, but I am very satisfied drinking in the depth and beauty of this game, I love basketball.”

He said the band was about to enter the studio to record their twelfth studio album, successor to The Getaway, in 2016.

The Getaway was the eleventh studio album by Red Hot Chili Peppers, released through Warner Bros. on June 17, 2016. This is the band’s first studio album since 2011’s I’m with You. It was produced by Danger Mouse, who replaced Rick Rubin after twenty-five years and six albums as the band’s producer.

The Getaway made its debut at number one in ten different countries while reaching number two in the band’s home country of the United States along with the United Kingdom and Canada. Since its release, the album has received mostly favorable reviews.