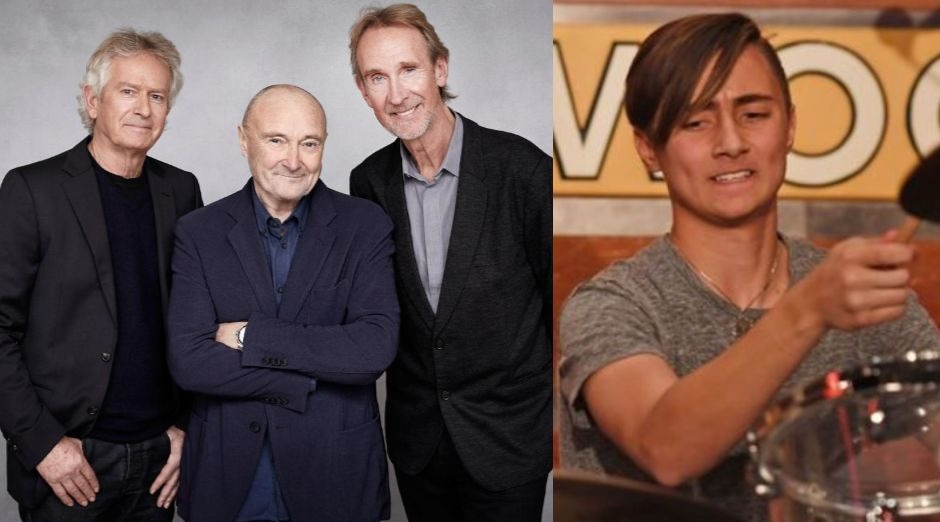 In an recent interview, the legendary Genesis singer Phil Collins talked about their upcoming reunion tour and also about his son Nicholas, that will play the drums. Besides him, Tony Banks (Keyboards) and Mike Rutherford (Guitar) are back in the band.

Called “The Last Domino? Tour,” the shows are scheduled from November to December only in the United Kingdom so far.

Phil Collins said about the reunion and his son Nicholas:

Phil, with Nicholas coming on board, he toured with you on your solo tour and you’re well aware of his abilities. He’ll be 19 when this tour starts, which is the same age that you were when you first met these two. When you auditioned. I take it that Tony and Mike didn’t need much convincing of Nicholas’s abilities…

“Well, it wasn’t a question. I mean, I didn’t try to convince anybody. I did think he’d be capable of doing it. When we started my tour this time around, he was 16.

“I think when he presented the idea to my band that I was hoping that we’re gonna make this work.

“It didn’t come up. And over a period of time he got better and better. By which time the guys had seen him. And I think Mike put it succinctly when he said, ‘He gets it, he gets what it needs to sound like.'”

“What’s happened is that having this new energy from Nick has brought, first, new energy of enthusiasm. Which is great, but also it’s changed, in a way, it’s a whole new sound now.

“Because Nick is more like his dad, the songs sort of got back to almost sounding more like they were on the original records, which in a way makes them feel different by quite a lot. I like that, it’s new for us.”

Obviously, Phil, you’ve had your concerns about your ability to play and whatnot?

“Yeah, well, I still have those. I’m gonna do my damnedest to be able to play something, you know, to accompany Nick would be more that way I look at it.

“The two-drummers thing was a big aspect of Genesis’ sound, really, it was a very exciting part of it, so it won’t be like that; it will be different from that, but it’ll have some aspects of that, hopefully.

Do you each individually have a favorite piece of music from the other members from the solo work you’ve done outside of Genesis? For example, Tony is there anything that Phil and Mike have done…?

Tony: “It’s a low barrel to reach down into. I mean, I’ve always loved [Phil’s 1981 hit] ‘In the Air Tonight,’ we had the opportunity to do this with Genesis, but I don’t remember that at all. It’s just such a wonderfully atmospheric piece, you know? The drum riff in it.

Is there an aim beyond this last tour in terms of ever writing together again, or is this a purely touring idea?

Phil Collins: “I don’t work with people over 70. [Laughs] I mean, we never say never because we always say that, really. And i think we kind of live in the present a little bit.

“I mean, I wouldn’t necessarily have thought 13 years ago that we would ever do it again. And that we’ve been 13 years before, we did do it again… So you just accept how the situation evolves, different things happen in your life, and things become possible.

“I mean, the chances of us writing together again are pretty small, actually, but who knows…”

In these days of bands splitting up and ‘he said, she said’ stuff that goes around, what struck me with Genesis is that friendship’s always been there, there’s never been any of that acrimony.

Mike: “I’m actually proud of that. I mean, you’re always making friends, had a great sense of humor within our team of three, which is great, and so it happened to be the natural process for going back on the road, and then sort of it felt kind of the right time.”