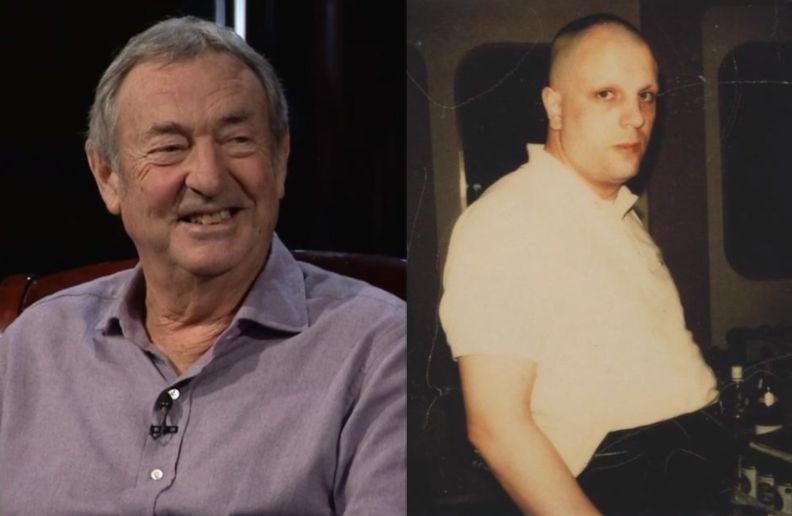 In an interview on SiriusXM, Pink Floyd drummer Nick Mason recalled the “shocking” meeting him and the band had with Syd Barrett during the recording sessions of the bands classic album “Wish You Were Here”.

Barrett, who made an unannounced visit to the Abbey Roads studio as the band was working on the “Wish You Were Here” album, seven years after he parted ways with the group due to mental-health issues.

Barrett watched his ex-bandmates work on the final mix of “Shine On You Crazy Diamond,” a song that was actually about him.

Syd was 29 at the time. He was overweight and had shaved off all of his hair, including his eyebrows. When Roger Waters asked him for his thoughts on the tune, Barret said it “sounds a bit old.”

In the mythology of the whole Syd leaving the band thing was that, well, he either went mad or it was drugs or some combination of both. And he just left, the band kind of abandoned him and carried on, but as I look at it, it looks like there were members of Pink Floyd on both of these records, it seems like people were trying to help him. Is it true that he was kind of abandoned and left to his own devices? It didn’t seem that way to me.

“I don’t think he was abandoned at all. I think there was a realization that he absolutely shouldn’t be out touring and playing. The problem was – 52 years ago or whenever it was – we had no idea how to look after him.

“We thought he was mad because he didn’t want to be in the band anymore whereas actually, he was the sane one, and we were the mad ones.

“It’s not a good starting point in terms of looking after anyone, but over the years, the others all were involved in production on his two solo albums afterward and we have always stayed in some contact with the family of Syd and attempted to look after his catalog of songs.”

Is that story about him turning up in the control room on [1975’s] ‘Wish You Were Here’ session – was that true?

“It’s absolutely true. But the interesting thing is that everyone has a slightly different memory of it.

“In fact, David’s guitar tech put quite a lot of effort in trying to ascertain exactly what happened and when because it appears that he came on two occasions, but no one can quite remember what happened apart from him arriving and being in the studio for a while or in the control room and then leaving again.”

I guess you’d have to say that it would’ve been, at the time, almost not just a surprise, but maybe a traumatic experience to see someone who’s looking so different come in off the street with no place while you were making a record?

“Shocking is the word. I mean, I’d be doing something in the studio and when I came to the control room there was this large, odd-looking guy and I absolutely didn’t recognize him.

“It actually took David to say, ‘Nick, do you know who this is? It’s Syd.’ It sort of made sense, but I don’t know, shocking is the word.”

Syd Barret was writing most of the material, so when things went wrong for him and you realized that you can’t continue on with him, did the band panic? Did you even have to have that discussion, say, ‘Do we even continue, and if so, how do we do that?’

“No, we didn’t. My take on it was slightly different. Life has become so difficult with Syd and we were still committed to wanting to perform and wanting to do something.

“Frankly, it was a relief when Syd had gone, and even though we didn’t have any new material, even though we’ve lost our main man, the introduction of David was enough to keep us afloat. And in fact, we did plenty of videos and singles in the next six months.”

He told stories about five of you being on stage for a short while.

“It was a very short while and that also persuaded us that we really would be happier without it. It’s extraordinary to look back on it, but there was never that sense of, ‘Oh, what are we going to do?’. It was very much, ‘Yes, we can do without him and we will do without him.'”

Thinking about the show you have in the North-American tour with the new Saucerful of Secrets band – have you invited the other living Pink Floyd members to come to visit? Or have they seen it in Europe, could they get up on stage and jam with you?

“Well, obviously, if they bought a ticket, they can. Both of them have said they might pitch up at some point, but we’ll wait and see. It would be unfair to sell it on that basis.”

I also think it’s cool that they want to support you in that way. And by the way, they have to learn a little bit about these songs – I’m sure you had to re-learn some of them, right?

“Yeah, I suspect David’s already got them in his brain suitably.”

When it comes to playing this material, what do you have to do? Do you have to ask permission? I mean, you are a founding member of the band, but do you have to call Gilmour and Waters? Do you call them as a necessity? How does it go when you want to play a set like this?

“It’s absolutely open to me to do what I want, but yes, I did call both of them, and they were both encouraging and helpful rather than anything else. It sort of felt like good manners, but the music is available to all of us.

“It’s only if you want to be a tribute band and trying to do an entire show with movies, then you might have to get permission. It was never contentious anyway.”