Richard Kruspe, Rammstein guitarist, said the band’s next album may be the last.

“I was in doubt about returning to the studio with Rammstein, because the last time we almost broke the band making a record, it’s always a stressful and painful process, I was nervous about it. So we came to an agreement where we decided that we would record only five songs, nothing more so we would not feel pressured.” 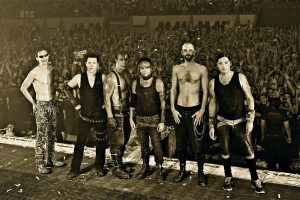 “We started two years ago, and I can say that playing with guys for some reason is a natural and fun thing to do. And since then we have created 28 ideas. I would not say music, but ideas. And somehow we went back to what Rammstein was in the beginning where we were basically emotional and we were excited to compose”.

“It was not like this anymore. We come to a point where one respects the other, but now we return to the starting point again. I feel that for some reason this will be our last album. It’s a feeling, I may be wrong, but that’s how I feel, and for this I’m striving 200 percent to that leaves as good as possible.”

Back In Time: John Lennon talks about Sex Pistols, Madness and B52’s
Gene Simmons: “If I could, I would trademark the air you breathe”
Advertisement
To Top