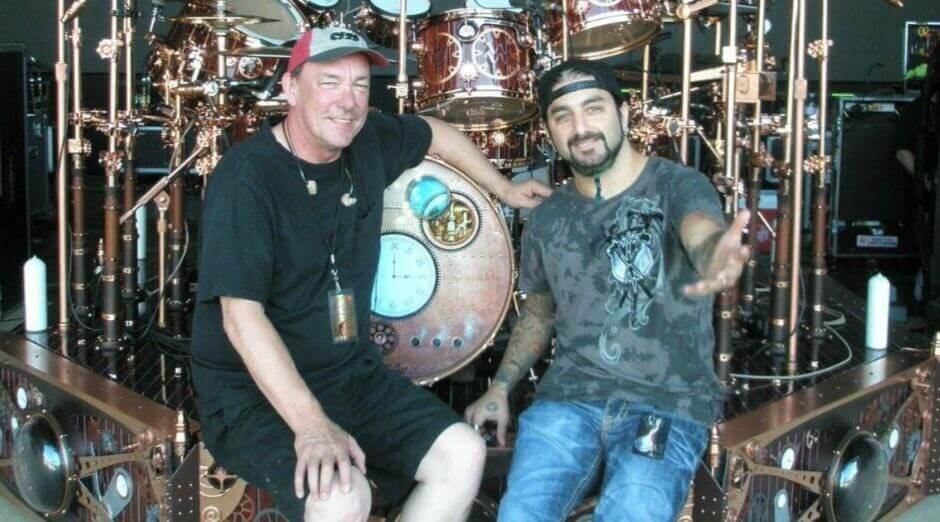 Drummer Mike Portnoy, famous for his work on Dream Theater showed in a recent Youtube video his extensive record collection and revealed his 5 favorite albums of all time and explained why.

Mike Portnoy elects his 5 favorite albums of all time:

“This is ‘Ziggy Stardust,’ or I should say the official title, ‘The Rise and Fall of Ziggy Stardust and the Spiders From Mars.’ I think this was ’72, and check this out, this one is on orange vinyl, the original RCA label. This is from start to finish a classic.”

“I’ve covered a lot of these songs, I did ‘Moonage Daydream’ with The Winery Dogs… I did ‘Suffragette City’ with Metal Allegiance, I did ‘Rock N’ Roll Suicide’ with Neal [Morse] and Randy [George]… Every one of these songs, like, the perfect album from start to finish. ‘Five Years’ is so good; ‘Starman’ is so good… ‘Hang on to Yourself’ – classic. This is as good as it gets.”

“It was released three months after I was; I was born in April ’67 and the album came out in July ’67. So it’s a nice landmark for an album that has been around for my entire lifetime. It’s an album that broke every rule and created a million new ones. Everything from the conceptual zeal to the album artwork, the gatefold sleeve, and the production, everything about it was completely groundbreaking.

“The Beatles are my No. 1 favorite all-time band, so having to pick one single album from them is always rough, it could change from day to day; I could easily of very easily picked ‘Revolver’ or ‘Abbey Road’ or ‘Rubber Soul.’ But it seems like ‘Sgt. Pepper’s Lonely Hearts Club Band’ is the one that if you held a gun to my head.”

“This came out when I was two years old and I was listening to it at two years old. I was a huge music fan from the day I was born. I remember my dad introducing me to ‘Tommy’ and at first I was more interested in the quirky songs like ‘Tommy’s Holiday Camp’ or some of the sound effects on ‘Smash The Mirror.’ But as I got older I started to understand how incredibly groundbreaking it was as the first rock opera.

“And then as I got even older I started to really appreciate Keith Moon and he became my first drum hero. But this album is very much like the soundtrack to my childhood; I saw The Who play ‘Tommy’ in its entirety in 1989 at the Radio City Music Hall. And I had a real emotional response to it.

“Once they kicked into ‘Overture’ it sent chills down my spine and it was like my childhood being revisited. It was just a weird emotional reaction I had. And then last year I had the chance to actually play the entire ‘Tommy’ with my The Who tribute band Amazing Journey. It was fun to do the album as a drummer.”

“Like ‘Ziggy Stardust,’ it’s just an incredible collection of pop songs but with a big theatrical overtone to it. Elton John was in his heyday and it was all about glam and bigger presentations. And this is one of those albums where every single track is an absolutely perfect song.

“And like ‘Ziggy Stardust,’ it’s got its handful of hits like ‘Bennie and the Jets’ and ‘Saturday Night’s Alright for Fighting.’ But it also has a great amount of overlooked classic songs like ‘Grey Seal’ or ‘The Ballad of Danny Bailey’ – those are great overlooked songs.

“Also like ‘Ziggy Stardust’ it has an incredible opener and an incredible closer. The opener of ‘Funeral for a Friend/Love Lies Bleeding’ is absolutely classic, kind of prog meets pop, and Dream Theater even covered that song in the past. And then it closes with ‘Harmony,’ which is this majestic, beautiful track. So, a perfect album.”

“Pink Floyd, like The Beatles, are one of my favorite bands of all time, and like The Beatles, it’s hard to really pick one, but if you held a gun to my head I think ‘The Wall’ would be the one just because I’m a sucker for ‘more is more’ and over the top production and The Wall’s surely that – a double album and a concept album, it was just a huge mammoth piece of music, which eventually translated to an incredible film as well.

“At this point, Roger Waters had taken over the band and was running the show, but this album was obviously an extension of his genius; if you listen to the new My Chemical Romance album you can hear that it’s all directly ripping everything off from The Wall, so it is still felt 30 years later,” Mike Portnoy said.