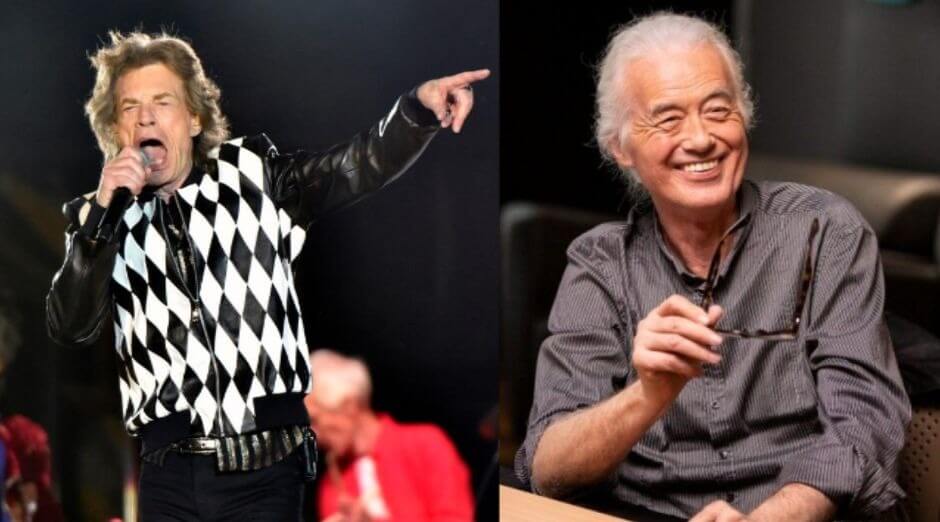 Rolling Stones released a the “lost” song “Scarlet” featuring Jimmy Page and Mick Jagger recalled in an interview with BBC Radio how he met Jimmy Page and what was his first reaction to Led Zeppelin.

Mick Jagger recalled when “Scarlet” was made, saying Jimmy Page was the one that remembered everything:

“But I must say this basement was very luxurious. [Laughs] And anyway, we just got together and started – it was Keith [Richards, guitar] and me, and then Jimmy Page turned up for some reason, and we had various other musicians. So I had this song, and so we ran through this amongst other things. Then Keith and I just focused on it, and since then I had completely forgotten about it.”

“I thought it was Ginger Baker on drums, and Jimmy Page remembered – I didn’t remember anything – Jimmy Page remembered everything, ‘This person’s done this, it wasn’t Ginger Baker,’ and I said, ‘Alright. I haven’t spoken to him [Page] in years, but he’s very sweet, and he moved the whole thing. Anyway – here it is, it’s one of the extra tracks that we’ve put on ‘Goats Head Soup,'” Mick Jagger said.

Thank goodness Jimmy Page remembers these things because it’s not really surprising that you may not necessarily remember all these sessions.

“Thank goodness he does. If you do that many studios in that many studios. I mean, you’re in and out, you don’t really remember. But anyway, I’m glad first that people like them, and that’s great, I’m glad they’ll see eventually the light of day.”

“Because some of them are just as good as the stuff that you’ve put out. It’s just that you never finish them. The bottom line is that you didn’t finish them. You’re too lazy or you’re on a deadline or so. We don’t have time to finish these other ones because we’ve got to go on tour or something. So that’s how they get left behind really.”

Looking back on those days, you had the RSM, The Rolling Stones Mobile Studio, you were touring so much and writing. It would be difficult to record because you’d be out on the road. So you had your own mobile studio, which I do believe Led Zeppelin recorded in?

“Yeah, we recorded like a lot of [1971’s] ‘Sticky Fingers’ in that mobile, and in my house in the country – I have a house in Hampshire and Led Zeppelin used it for some of their records, and they got a really great drum sounds in this room.”

“So there’s a bit of it, sort of asymmetry. There was a time, it was a little bit later for them,” Mick Jagger said.

Do you remember meeting the Led Zeppelin boys?

“Well, the thing was, very early on, we’re going 10 years before that – makes you feel very young. I used to produce records, I did this record ‘Out of Time’ for Chris Farlowe [in 1966], which was a very successful record in the early ’60s.”

“Keith and I wrote it, and I used to be a producer. It was fun for me, I was sort of learning the trade, so to speak. It was all played live, of course. And the backing musicians, one of them was Jimmy Page. He was one of the best session guitarists at the time, he was very young. They used to play chess in between takes, that was their thing.”

“And I used to go watch them live, I remember watching their concerts live, it was great – thunderous racket. And I saw their last concert as well [the London O2 Arena one-off reunion in 2006], and they were absolutely incredible, and I was so disappointed they didn’t actually go on [reunion] tour and do it, but that’s their business, not mine,” Mick Jagger said.

New material from The Stones – how long will we have to wait?

“I don’t know. We recorded, you know, the same time we recorded [this year’s single] ‘Ghost Town,’ we recorded a bunch of tracks, so I’ve been finishing off the vocals and some other instruments on them and do some mixes on them.

“So I’m working on that, and we’ll try it. I mean, we’ve got to get together and do a couple of more sessions, I think, and we’re not really gonna get together right now, but you know, it sounds good, what we’ve done sounds pretty good to me,” Mick Jagger said.