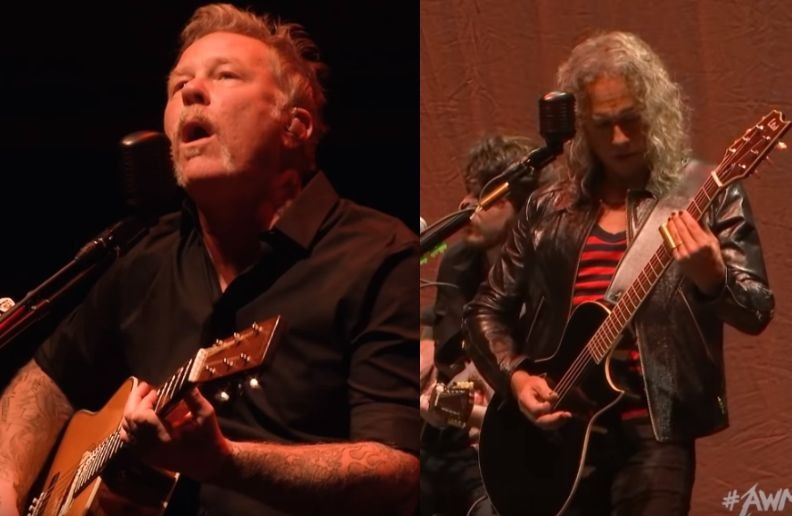 Metallica made a different version for the classic “The Four Horsemen”, a track included on the 1983 album Kill ‘Em All. The theme was recorded live at a concert in San Francisco last November on an event made to raise money for the band’s non-profit organization, All Within My Hands Foundation, with the goal of fighting poverty.

From the lineup of the show, which will be released on a double vinyl with the title “Helping Hands … Live & Acoustic at the Masonic” on February 1st, there were also themes like ‘Disposable Heroes’, ‘All Within My Hands’ ‘Nothing Else Matters’, ‘Enter Sandman’ and versions of ‘When a Blind Man Cries’ by Deep Purple and ‘Please Do not Judas Me’ by Nazareth.

See below the video of the country version of ‘The Four Horsemen’:

The song was originally called “The Mechanix”, had different lyrics and was included in the No Life ’til Leather demo album. The song was written by Dave Mustaine (leader of Megadeth), then guitarist of the band, during the time he was in his previous band, Panic. After Mustaine was kicked out of Metallica, he included on the first album of his new group, Megadeth, Killing Is My Business … And Business Is Good !, with the title slightly shortened to just “Mechanix” in the original lyrics, and at a much faster pace.

It was released on Metallica’s first studio album, Kill ‘Em All, in 1983. After Dave Mustaine was kicked out of the band for being drunk and drugged, James Hetfield rewrote the lyrics and Kirk Hammett added a new melodic guitar solo in the middle of the song. This section is rarely played when Metallica performs this song live. Mustaine was still receiving credit for the song, although Mustaine said he had asked the band not to use their material, a statement that Metallica contests.