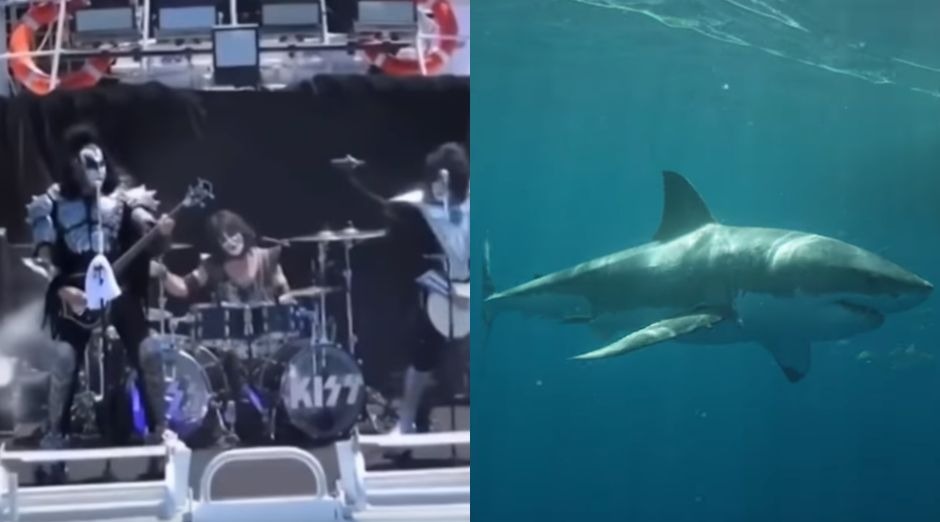 Kiss performed, on November 18 a very different show in Australia. The presentation was made especially for white sharks and was also marked by the absence of vocalist and guitarist Paul Stanley.

“Starchild” did not attend the show because he is at rest due to a severe flu with laryngitis that struck him a few days ago. The health problem even caused the band’s entire Oceania tour to be canceled.

It was up to vocalist and bassist Gene Simmons, guitarist Tommy Thayer and drummer Eric Singer to take the stage on a ship for the show. It was the second time in the history of Kiss that Paul Stanley did not perform: the first time, on July 27, 2007, he did not perform with the group at Soboba Casino in San Jacinto, United States, for suffering a cardiac arrhythmia.

The white shark show was performed on a platform just above the water. Eight fans were chosen to follow the performance underwater, in cages, to see the animals up close.

The initiative was from Airbnb Animal Experience, which uses tourists to entertain animals rather than the other way around. Experts hired by the company say white sharks are attracted to low frequencies, so they may like rock music.

No sharks actually turned up. The host of the concert, Adventure Bay Charters owner Matt Waller, said the concert was to demonstrate the charter company attracted sharks using sound waves — rather than blood or berley.

His company used music to “appeal to the electroreception sense through acoustics in the water”.

“We don’t use blood and bait to attract sharks,” Mr Waller said.

“We don’t feed them.

“We’ve got onto this road of acoustic attraction and being more passive.

See below the repertoire played by Kiss and a video of the peculiar show: