Metallica’s Kirk Hammett talked with Polar Music about his priorities as a guitarist.

“A lot of times over the course of the song, I’m just playing rhythm parts – chords or riffs – to supplement what’s going on under the vocals. And then, when it’s time to get to the solo section or the lead section, that’s my moment to express myself and just let it fly. 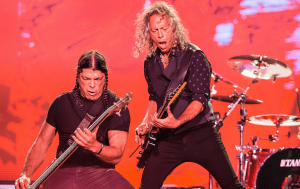 “For me, the great thing to do is to just play spontaneously and not even think about it -just raw, unadulterated emotion, unfiltered. From my very core, from my heart, from my soul, filtered through my brain, through my heart, out through my fingertips onto the neck of the guitar, out through the pickups for everyone else to see or hear.

“For me, that’s super important, because I come from a generation of musicians that valued spontaneity and valued improvisation and valued never playing the same song the same way twice.” 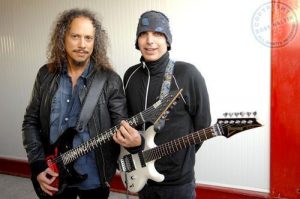 He also talked about Metallica taking chances on their musicality:

“We thrive on spontaneity, we thrive off being challenged, we thrive off doing things that people say, ‘Oh, you can’t do that.’ And we’re, like, ‘Oh, yeah? We’ll show you.’ That’s just how it’s always been in the band, and I think a lot of it has to do with the fact that we’re kind of that way as people.

“We’re very dogged, stubborn, we all have our visions, which – thank God – they’re mutual. We’re not a band to back down from most challenges. Like, if you said to Rob [Trujillo] and me, ‘Okay, we want you guys to play a John Coltrane song,’ Rob and I will sit down and learn the John Coltrane song and have it ready to go in a few days- no problem. 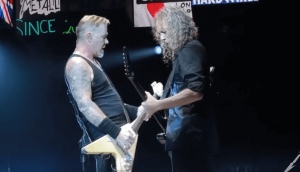 “I mean, we have that ability – Rob and I. The other guys, they play a lot by instinct, so they’re like, ‘Yeah, you guys lay down the foundation and then we’ll find a way to fit in.’

“For us, the sky’s the limit, really. The only limits that we have on this band are the limits that we put on ourselves, and we try not to limit ourselves. But as humans, naturally you’re gonna say, ‘Oh, wait,’ you’re gonna take a step back from something, but then if you give it some thought, you’re, like, ‘Yeah, maybe. Maybe. It’s worth a try.'”