Jason Newsted, ex-Metallica bassist, and his band The Chophouse Band performed last Friday at the Cultural Council in Florida and covered the Neil Young classic “Rockin ‘In The Free World.”

His band’s name was inspired by the recording studio Jason founded, The Chophouse Records Studio. With four units in different cities in the United States, the first was opened in 1992 in San Francisco, California following the success of Metallica’s Black Album the previous year. 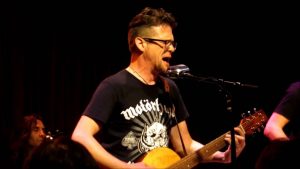 Currently the repertoire of The Chophouse Band consists of covers of classics by Johnny Cash, George Jones, Tom Waits, Neil Young, Bob Dylan and Jason Isbell. According to InJupiter, Jason has started to compose some original songs for the band, but there is still no release date for an album or EP.

Jason also has an art exhibition at the Cultural Council called Rawk – The Art of Jason Newsted until February 3rd.

The bassist left Metallica in 2001 and was replaced by Robert Trujillo.