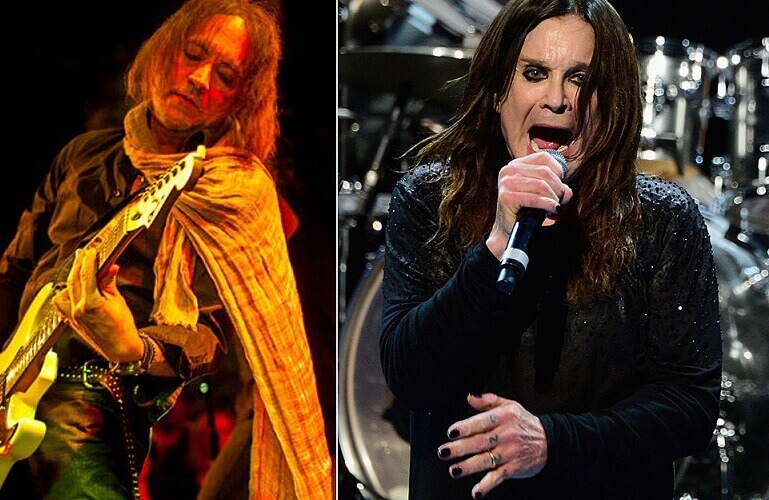 In interview with Ultimate Guitar, Jake E. Lee talked about many subjects, and one of them was the way Ozzy handled the dismissal of members of the band. And he revealed that Ozzy was not so polite to do that.

You joined Ozzy’s band back in the late ’82 or early ’83. You were actually the first guy to play on Ozzy’s studio albums after Randy Rhoads. How did that cooperation start and what it felt like to be the first guy in the studio after Randy?

“After Brad [Gillis] said that he was going to go back to Night Ranger [after briefly joining Ozzy’s band following Rhoads’ death in 1982], Ozzy was looking for a guitar player. And he went back to [bassist and longtime friend] Dana Strum. Dana Strum, from what I understand, was the original bassist in Ozzy’s band. Ozzy was living in LA at the time and Dana would bring him guitar players on to try out. That’s how he found Randy.

“So when he decided to find another guitar player, he went back to Dana Strum. And Dana basically got 10 guys that were supposed to be the best guys in LA at the time. We all went into the studio and he gave us like five minutes to record whatever we wanted to record.

“Then he took a photo of us and he sent the tapes and photos to Ozzy. Other than me, there was also George Lynch [of Dokken fame]. I guess George was his first choice because from what I understand, from what everybody tells me from back in those days, George was offered first to be Ozzy’s guitar player – before Randy.

“And George didn’t take it because Dokken had just gotten signed, I think in Germany, and he thought that it looked like a better opportunity. And, you know, Ozzy was a mess back then. So he decided to stick with Dokken rather than join Ozzy, and that’s when Randy got the gig.

“So George got a shot at it the second time around and he went out on tour with him. He didn’t play any shows but he would do soundtracks and stuff like that. And apparently, Ozzy wasn’t really happy with the way George sounded during the soundchecks. So he wanted to hear somebody else. And I got a call one night that Ozzy was going to be in town and he wanted to hear me play, and it would be with the band.

“The very next day I was supposed to show up at the studio. And I didn’t know the songs, I didn’t think I was going to get a callback. So I had to go out. I borrowed the record from somebody – the first Ozzy album – and I learned ‘Crazy Train’ and ‘I Don’t Know’ and I showed up for the audition the next day. [Laughs]

“And I remember because I didn’t know the songs and they are actually pretty similar. You know, they’re both in A, they’re both about the same tempo, and they have the 16th note lower A string predominating through it. When I did the audition, I would kind of mix the parts up. [Laughs] You know, I go into a different part…

“And I thought the audition was terrible because I was messing up the songs. I played fine. It’s not like I couldn’t play, but I obviously didn’t know the songs. And I was sure I didn’t have it.

“And then Ozzy walked up and he looked at me and said, ‘Do you want it?’ I said, ‘Do I want it?’ And he says, ‘Yeah. Do you want the fuckin’ gig?’ I said, ‘Yeeees…’ [Laughs] And he turned to George and he said, ‘It’s his. You lost it.’ And then he walked away. [Laughs] And that was the first time I saw Ozzy fire somebody. Never a pretty sight.

“I hadn’t even met George. It was after Ozzy walked away, I turned to George and said, ‘Hi, my name’s Jake, by the way.’ It was a very awkward introduction for me and George. I like George, we get along. Every time I see him, it’s a good time. So I’m glad he didn’t hold that against me.”

You said it’s not a pleasant sight to see Ozzy fire someone. Did you see him fire someone else?
“Oh yeah.”

Do you remember the worst moments of those?

“I think the worst one was when he fired Don Costa, who was the bass player when I joined the band. And he was only in it for maybe three months or something. We did the European tour opening for Whitesnake, and then we did some American gigs, make-up gigs that were canceled because of Randy’s passing.

“And then one day, Don got called to the back of the bus by Ozzy. And maybe three minutes later, Don came running out to the back, holding his face. There was blood all over his face. He ran off the bus. I was like, ‘Holy shit!’

“I walked back, I saw Ozzy, and he just looked at me. And I said, ‘What happened?’ He said *imitates Ozzy’s voice* ‘He tried to kiss me.’ I said, ‘Wait a minute. You’re telling me the bass player just went to the back of the bus and tried to kiss you?’ And he said, ‘Yeah, that’s my story.’ [Laughs]

“So I went out and I asked Don what happened, and he said, ‘I don’t know. I just went back there, Ozzy said he had something to say and he said, ‘Come closer, come closer.’ And as soon as I got close enough, he head-butted me in the nose.’ I was like, ‘Oh shit. I think you just got fired.’ [Laughs]

“And the ensuing weeks after that, the very next gig was going to be a US Festival. I think that was maybe three weeks away.

“Basically, Ozzy assaulted him. I talked to Don and he said they worked it all out, he signed an agreement that he would never press charges or anything. And then they spent I think five grand to have his nose fixed through plastic surgery.

“And I saw him, he’s all happy, he’s all smiling, he’s got his family with him… And I saw him walk up to the bus, I saw Sharon come up and tell him that he wasn’t in the band anymore. And it was horrible.

“I mean, if you’re going to fire somebody, why do it like that? I think that was the worst firing I saw. And I don’t know how it could get much worse. So when I got fired, I think I actually got a pretty good deal. [Laughs]”

Is it true that you were fired through a telegram?

Because that’s what Wikipedia says.

“No. I can honestly say I’ve never received a telegram in my life. [Laughs] I don’t even know how that works. Actually, I found out I was going… Sharon Osborne asked me to go out to dinner with her and she wanted to talk to me about something.

“So we went out and it was a wonderful dinner – it was all on her, a beautiful, expensive dinner. And we chatted and then she said, ‘OK, let’s go back to the hotel, I still need to talk to you.’ I said, ‘Cool. Okay, whatever.’

“We went back to the hotel. We talked a little bit but nothing major, nothing important, just chit-chat really. And then I left and I went home. And my roommate, who was also my guitar tech, he came home and said, ‘Dude, how are you doing?’. I said, ‘I’m OK. Why?’ He said, ‘I just came back from the Rainbow and I saw Randy and Phil and they said you were getting fired tonight.’

“And I said, ‘What?! No. No way. I just talked to Sharon, I just went out to dinner with her. I think if I got fired, I would know about it.’ And he said, ‘No, that’s not what everybody in the Rainbow is talking about.’

So that was it? They didn’t give you the reason why?
“No. Well, Ozzy called the next day to wish me luck. He said it was time for me to spread my wings and do my own thing. And that’s all he said. He didn’t say anything, he wished me the best. And that was that was the last time I talked to Ozzy, too.”

There was no bad blood between you? I mean, at least at that point?

“I didn’t think there was any bad blood. But all the interviews he did after that, he really tore my head off. He said he couldn’t work with me, that I was egotistical and arrogant – he said all kinds of fucked-up things about me.

“I don’t know where that came from, but I figured out eventually that I think he got a lot of shit for firing me. Not necessarily from musicians or anything, but I think maybe from the record company. Because the record company doesn’t… you know, you have a big album like [1986’s] ‘Ultimate Sin’ [Jake’s second and final studio album with Ozzy], they don’t want to hear that you just fired the guitar player and songwriter.

“I think he got some grief about that, over firing me. So he had to come out and make it sound like that I just this horrible person to work with. It was kind of ugly there for a while, but I never said anything back. Because I didn’t have any bad blood towards him and I wasn’t going to get into a media war with Ozzy Osbourne, There’s no way I could win that.

“As far as I know, there wasn’t really any bad blood, but he made it look like it for a while.”