It was released on October 6, 1969, in the United States as the B-side of the single compact that had “Something” by George Harrison as side A. With this format, was also launched around the world. 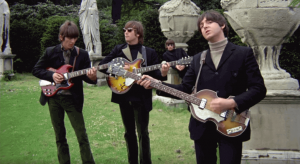 John Lennon wrote this song for Timothy Leary, based on the slogan of his 1969 campaign for the government of California (Come Together, Join the Party). It has influences from Chuck Berry’s song “You Can not Catch Me”. The letter is nonsense, subject to diverse interpretations.

Now, you have the chance to hear the great Paul McCartney isolated bass track on the song.

The beginning of this recording marks the return of engineer Geoff Emerick to work with the Beatles. He had left the quartet on July 16, 1968 for not being able to withstand the heavy weather that hung over recording sessions at the time.

American singer / songwriter Michael Jackson re-recorded the song for his HIStory album after becoming the owner of the catalog with the rights to all Beatles songs. The music video re-recorded by Michael can be seen at the end of his movie called Moonwalker.