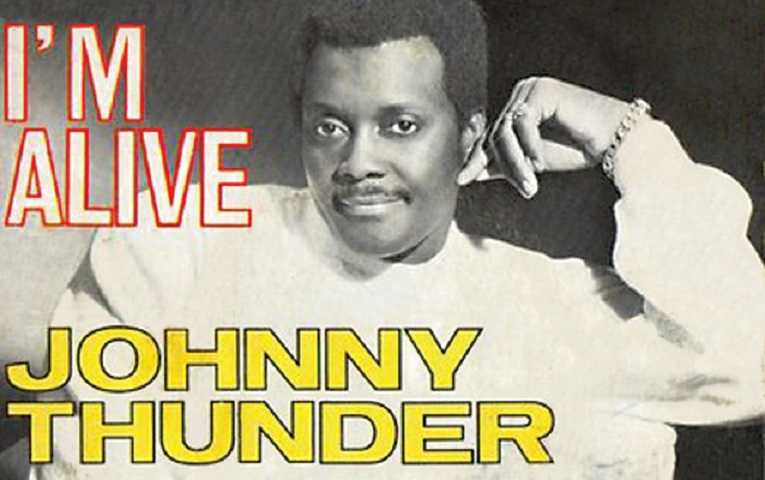 Gil Hamilton was born in Leesburg, Florida, and started singing in church and on street corners when in his teens. Aiming to start a singing career in the late 1950s, he moved to New York City, where he joined a touring version of The Drifters for a few months, and also sang in an Apollo Theater production, A Blind Man Sings the Blues.

He also recorded as a backing singer for Dionne Warwick and others, and, as Gil Hamilton, recorded several singles for various small labels. One of his singles recorded in 1962, “Tell Her”, written by Bert Berns under the pseudonym Bert Russell, and produced by Berns, was the original version of “Tell Him” which later became an international hit for The Exciters (and in the UK for Billie Davis). Hamilton’s 1962 Vee Jay single “Move & Groove” was the original version of Johnny O’Keefe’s 1963 Australian hit “Move Baby Move.

In 1963, Thunder linked up with songwriter and record producer Teddy Vann, who persuaded him to record a novelty version of the traditional children’s nursery song “Loop de Loop” (also known as “Looby Lou”), using the name “Johnny Thunder”. Vann also advised him to appeal more to the teenage market by claiming he was born in 1941 rather than his actual birth year of 1932.

The record, released on the Diamond label, became a big hit, rising to No. 4 on the Billboard Hot 100 in early 1963; it was covered by Frankie Vaughan in the UK. Johnny Thunder released an album, Loop De Loop, and several follow-up singles, of which “Everybody Do The Sloopy” was the most successful, reaching no. 67 in late 1965. In 1967, he had another minor hit as part of a duo with Ruby Winters on “Make Love To Me”.