The music video for the single, directed by Julien Temple, starred Johnny Depp as the protagonist, Eddie Rebel, as well as Gabrielle Anwar as Eddie’s girlfriend and Faye Dunaway as his manager, and featured cameos by Terence Trent D’Arby, Chynna Phillips, and Matt LeBlanc.

The video was shot during the filming of Arizona Dream, in which both Depp and Dunaway starred, which was on hiatus as its director Emir Kusturica had suffered a nervous breakdown. The song was extended in order to include more of the 18 minutes of footage Temple had created.

“Into the Great Wide Open” by Tom Petty

Fresh out of high school, Eddie catches a bus to Hollywood and meets a girl (Anwar) with the same tattoo: a heart impaled with a stiletto knife. They move into a motel-style apartment building. Eddie works as a doorman while his girlfriend teaches him to play guitar. Their landlady (Dunaway) turns out to be a cross between a fairy godmother and a svengali, managing his increasing success as a rock star.

Success quickly goes to Eddie’s head. Things come to a peak when he excludes his manager from a red carpet event. Infuriated, she waves her magic wand (in the form of a cigarette holder) and breaks the spell, with disastrous results. 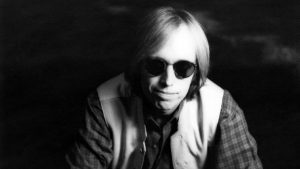 Vanity Flaire magazine reports that Eddie’s girlfriend is pregnant. He appears drunk and belligerent at an awards ceremony. He acts up during a music video shoot. Eddie’s career quickly fizzles, his girlfriend leaves him, and the heart in his tattoo fades away.

The story closes with Eddie returning to the tattoo parlor, where he finds a newcomer (LeBlanc) getting the same tattoo from a new tattoo artist (Depp). Tom Petty then closes the video with the classic fairy tale ending, sardonically, that “they all lived happily ever after”.

Tom Petty took the line “a rebel without a clue” from the 1989 single “I’ll Be You” by Minneapolis rock band The Replacements with whom he toured. The term was coined by Jim Steinman, who wrote “Rebel Without a Clue” for Bonnie Tyler on the 1982 release “Secret Dreams and Forbidden Fire”.

Muse’s Matt Bellamy says that guitar is not a lead instrument anymore and that’s good
Back In Time: Deep Purple performs Beatles’ “Help”
Advertisement
To Top