Fastway was a British rock band formed by guitarist “Fast” Eddie Clarke, formerly of Motörhead, and bassist Pete Way, formerly of UFO. In 1983, both players had been disgruntled with their own bands and decided to work together in a new outfit. They recruited drummer Jerry Shirley, formerly of Humble Pie, and the then-unknown vocalist Dave King.

They took their name from a combination of the founding members’ names. However, Way then discovered that he could not escape from his recording contract with Chrysalis Records, and then received a tempting offer to play for Ozzy Osbourne, so he abandoned the project without ever playing on a single record. Bringing in session bassist Mick Feat, the band then recorded their debut album, Fastway (Feat was uncredited on the album).

“Say What You Will” by Fastway

King then got a call from David Geffen and John Kalodner to come to the United States to head up a heavy metal “supergroup” called Katmandu. Katmandu also featured Mandy Meyer from Krokus on guitars.

The band was rounded out by Caine Carruthers of the soul band The Untouchables, and Mike Alonso of the Detroit rock band The Meanies. Katmandu released one self-titled album and had a couple of minor hits. Dave King would go on to form and front the widely successful Los Angeles-based Celtic punk band Flogging Molly, where he continues to this day. 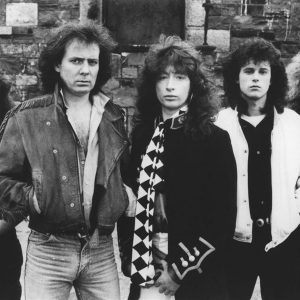 On 25 May 2007, Toby Jepson, former lead singer with Little Angels, announced he had accepted an approach from Fastway to perform lead vocal duties during the year’s festival appearances. An updated line-up played Sweden Rock Festival, Japanese Hard Rock Hell, and the Download Festival at Castle Donington. Besides guitarist Clarke and Jepson, the new band featured drummer Steve Strange (not to be confused with Visage singer Steve Strange) and John McManus (Mama’s Boys).

In an interview with Komodo Rock at the Hard Rock Hell Festival in November 2007, Eddie Clark confirmed that he and Toby Jepson would be working on new material. He said “Toby and I are going to sit down and maybe do a few tunes over the winter. See if we can write some tunes.” As of 2008, Toby Jepson announced he would go on to front Scottish hard rockers Gun full-time.

Steve Hackett reveals he almost formed a supergroup with Keith Emerson and Jack Bruce
Back In Time: Mötley Crüe performs Beatles’ “Helter Skelter” on US Festival
To Top