The great forgotten song “Rock N’ Roll Rebel” is from “Bark at the Moon”, the third studio album released by Ozzy Osbourne in his solo career.

It was released in late 1983 with Jake E. Lee for the first time, ahead of the guitars. Despite positive reviews, he embarked on the fads of the time with constant appearances on MTV and a tour with Mötley Crüe, leaving behind the classicism of Randy Rhoads’ compositions. This was Osbourne’s first work since the death of Rhoads.

Bark at the Moon is the only Ozzy Osbourne album on which the songwriting is credited entirely to Osbourne. However, guitarist Jake E. Lee maintains that he composed a significant amount of the album’s music but was cheated out of his writing and publishing claims by Osbourne’s wife and manager Sharon.

Lee claims that after he had composed the songs and completed recording his parts in the studio, he was presented with a contract which stated that he would have no claim to any writing or publishing relating to the album. 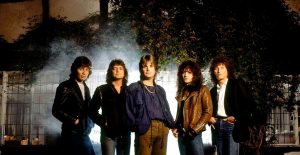 The contract also stated that Lee could not mention this publicly. Lee claims he signed the contract because he had no legal representation and because Sharon threatened to fire him and have another guitarist re-record his parts if he refused.

Some European pressings identified the track “Centre of Eternity” as “Forever”. On tours for the album, Osbourne referred to it as “Forever”. This can be heard on bootleg recordings of tours promoting the album. The title track was released as the album’s first single with an accompanying music video.